Pope Francis Leaves Korea With Message of Hope and Healing 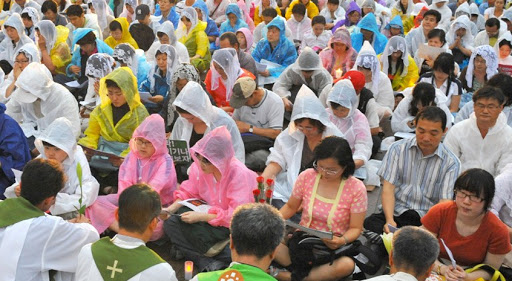 Pope Francis has left Seoul on a Korean Airlines flight headed for Rome at the conclusion of his five day visit to the Asian country. The Pope’s departure from the Korean capital came after a concluding Mass in Seoul’s Catholic cathedral, during which he challenged Christians to work and pray for peace and reconciliation on the divided peninsula.

This morning’s Mass intention at Myeong-dong Cathedral was for “Peace and Reconciliation in Korea.” Experiencing the stunning economic growth and material prosperity from close-up in Seoul, it’s easy to forget that South Korea is still technically at war with the North. For the past 60 years the peninsula has been divided in half by a no-man’s land known as the Demilitarized Zone, or DMZ, with guard towers, armed soldiers, and barbed-wire fencing for as far as the eye can see.

As a symbolic reminder of the pain and suffering caused by that division, a  crown of thorns, made from a piece of that barbed-wire fencing, was laid at the feet of the statue of Our Lady of Fatima inside the Cathedral, with the inscription in Latin: “Ut unum sint”—“That they may be one.”

The Cross, in fact, was the central image at the heart of the Pope’s homily: “What appears, from a human perspective, to be impossible, impractical and even at times repugnant,” he said, “(Christ) makes possible and fruitful through the infinite power of his Cross.” In the presence of Korean President, Park Geun-hye, who attended the Mass, Pope Francis challenged his listeners “to reject a mindset shaped by suspicion, confrontation and competition, and instead to shape a culture formed by the teaching of the Gospel and the noblest traditional values of the Korean people.” Finally, the Pope prayed for “the emergence of new opportunities for dialogue, encounter and the resolution of differences…and for an ever greater recognition that all Koreans are brothers and sisters, members of one family, one people.”

Before Mass, the Holy Father greeted a group of seven women of advanced age, seated in wheelchairs in front of the altar. This was the much anticipated encounter with the so-called “comfort women,” women who were forced into sexual slavery by the Japanese military during World War II and have been seeking an apology and compensation, without success, ever since. As always, Pope Francis listened to them intently while holding their aged hands.

Clearly the peace and reconciliation they seek is of a different, if no less valid, kind. But as the Pope reminded all in his homily: “The power of God bridges every division…and heals every wound.”

The day before, Francis also delivered a message of unity, exhorting Asian Catholics to engage in real and fruitful dialogue with others, reminding them they cannot do so unless they are sure of their identity rooted in their living faith in Christ.

“It is our living faith in Christ which is our deepest identity; it is from this that our dialogue begins, and this that we are asked to share, sincerely, honestly and without pretence, in the dialogue of everyday life, in the dialogue of charity, and in those more formal opportunities which may present themselves,” the Pope told the bishops of Asia when he met them at Haemi shrine in Daejeon Diocese.

The Pope met representatives of the Federation of Asian Bishops Conferences (FABC), headed by their president, Indian Cardinal Oswald Gracias, Archbishop of Bombay, who welcomed him on behalf of the bishops.

His remarks were of particular interest to China watchers, as Pope Francis commented, "I earnestly hope that those countries of your continent with whom the Holy See does not yet enjoy a full relationship may not hesitate to further a dialogue for the benefit of all."

Deviating from his prepared text, he added: "I’m not talking here only about a political dialogue, but about a fraternal dialogue," he said. "These Christians aren’t coming as conquerors, they aren’t trying to take away our identity." He said the important thing was to "walk together."

The Associated Press contributed to this report.