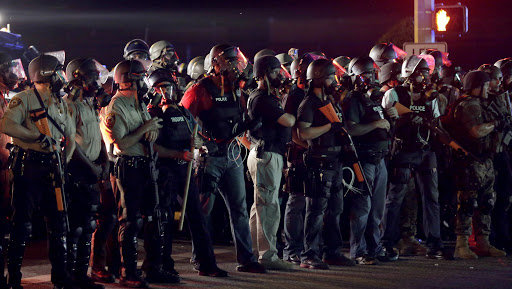 Residents are “struggling to find peace in the chaos,” archbishop says.

The Archbishop of St. Louis has called for prayers in the face of ongoing violence in Ferguson, Mo.

Archbishop Robert J. Carlson issued a letter Monday to the faithful in the Archdiocese of St. Louis, saying residents of Ferguson are “struggling to find peace in the chaos,” which has increased in the wake of the police shooting of a young black man.

Since Aug. 9, when 18-year-old Michael Brown was killed during an encounter with police, there have been confrontations with police, destruction and looting of stores.

“As people of Christ, we are struggling to find direction in the unrest,” the archbishop said.

Archbishop Carlson said he visited Ferguson and a memorial for Brown. “As I have been observing this situation and reflecting on it through much prayer, I find strength in the prayer of St. Francis of Assisi: ‘Lord, make me an instrument of your peace,’" said the archbishop. “In all circumstances, but especially in these difficult times, we are all called to be instruments of peace through our words and actions. Pope Francis recently stated that, ‘All men and women of good will are bound by the task of pursuing peace.’"

The archbishop invited Catholics in the region to attend a “Mass for Peace and Justice” he will celebrate at the Cathedral Basilica of Saint Louis Wednesday evening. During the Mass a special collection will be taken up to assist food pantries and parishes in the Ferguson area that offer assistance to those who have been affected by the looting and destruction of property.

In his letter, the archbishop also encouraged all parishes of the archdiocese to offer Masses for peace in the community. He suggested that parishes also might conduct holy hours, recitations of the rosary, or a special collection to assist in the effort.

He also asked Catholic schools in the archdiocese to begin a daily rosary for peace and to offer special intentions during all school Masses. He added that Catholic Family Services, an agency of Catholic Charities, has made counselors available to any Catholic school that requests assistance.

“Pope Francis has encouraged us again and again to ask Our Lady, the Undoer of Knots, to intercede for us in difficult circumstances,” the archbishop said in concluding his letter. “So too, I ask all the faithful in the Archdiocese of St. Louis to join me in praying to Our Blessed Mother and to her son, Our Lord Jesus Christ, for peace and justice in our community.”

The archdiocese this weekend is celebrating the 250th anniversary of the founding on St. Louis. The lineup of commemorative events includes a Mass celebrated by Auxiliary Bishop Edward Rice on Saturday at the Cathedral Basilica of St. Louis, followed by a community service fair and ice cream social. People had been asked to bring canned foods for a food drive, and that will take on more significance in light of what’s been going on, said Gabe Jones, archdiocesan spokesman.

Cardinal Justin Rigali, former archbishop of St. Louis, is papal legate to a Mass celebrating St. Louis IX, king of France and patron of the city and archdiocese, at the Cathedral Basilica of St. Louis on Sunday. Archbishop Carlo Maria Vigano, apostolic nuncio to the United States, and Archbishop Carlson will concelebrate. Prince Louis de Bourbon, a descendant of St. Louis IX, is among those expected to attend.