The Mary, Queen of Scots You Don’t Know 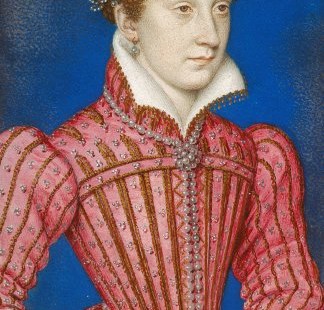 Mary lived her life with courage and dignity worthy of a grand Catholic monarch.

Mary, Queen of Scots, approached the executioner’s block dressed in a petticoat – blood-red, the martyr’s color. It was the end of a life lived as a royal victim – held prisoner, her infant son brutally taken from her and finally, beheaded by order of the Queen.

The Queen in question was played by the beautiful Cate Blanchett in the 1998 blockbuster film, ‘Elizabeth.’ Her ‘Good Queen Bess’ is England’s first feminist, a noble queen bravely defying the male oppressors embodied in the Catholic Church.

This Protestant version of reality – morphed through the lens of late 20th century feminism – has remained essentially unchallenged for nearly 500 years. Until very recently, the story of the great Elizabeth I (or “Gloriana’ as she preferred to be called) was ‘history’ to most Western Christians.

Today, as serious historians are beginning to re-examine what actually happened in Britain during the Reformation, the real story is finally beginning to emerge. One very black shadow on the sterling reputation of Gloriana was her horrific treatment of Mary, Queen of Scots.

The image of Mary which comes down to us through the biased lens of Protestant history is a classic case of ‘blaming the victim.’ The Whig historians of the British Empire depicted her as weak-willed and excessively romantic – so hopeless, in fact, that she ‘deserved’ her fate.

The real Mary Stuart, however, appears to unbiased eyes as guileless and forthright, clearly possessed of intelligence and character sufficient to survive a life rife with calamity – and still to keep her wits and charm about her.

From France to Scotland

Daughter of King James V of Scotland and Mary of Guise of France, Mary Stuart became Queen of Scotland at her father’s death. She was six days old. What followed were certainly her happiest years – her youth spent in the French court, educated by devoted French religious.

She was then married to the sickly Francis, son of Henry II and Catherine de Medici, whom she treated with kindness. His death two years later followed that of her own mother; she was eighteen years old.

Grieving her losses, Mary nevertheless stalwartly acknowledged her royal obligations, and left her merry France for dismal Scotland. It was a country engulfed in religious turmoil, with significant political opposition entrenched against her. The stern Puritans who followed John Knox made much of her elegant French wardrobe; she was said to have arrived with more than 20 lavish black gowns, the height of French fashion.

Regardless of their politics, however, the Scots were inevitably struck by Mary’s beauty, charm, sweetness of character and gentleness of spirit. An eyewitness relates that “In one of the … processions Mary was moving along with the rest, through a crowd of spectators, and the light from her torch fell upon her features and upon her hair in such a manner as to make her appear more beautiful than usual. A woman, standing there, pressed up nearer to her to view her more closely, and, seeing how beautiful she was, asked her if she was not an ‘angel’.”

Such generosity was characteristic of Mary; she was not a vindictive woman, though her basic goodness of heart was abused by many – including her Scottish husbands.

The persistent succession problem and Mary’s assertion of her queenly rights influenced her choice of husband. Aware of her monarchical responsibilities, she recognized that love rarely figured in dynastic matches.

Her choice, Henry Stuart (Lord Darnley), was like her a grandchild of Margaret Tudor, Henry VIII’s sister. The union would boost her claim of succession to the English throne. After marrying him, she patiently endured Darnley’s immature and dissolute lifestyle. He was vain, petulant and ambitious for ‘the Crown Matrimonial’ which would give him equal status with Mary.