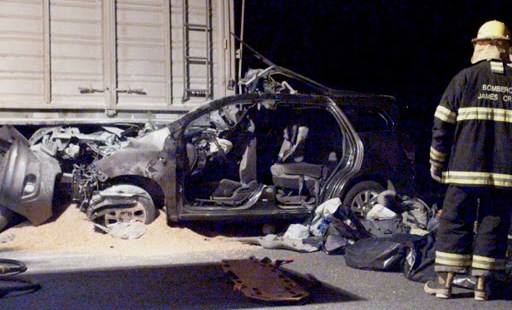 AP
AIG TO CRAIK - Firefighters inspect the car of Emanuel Bergoglio, nephew to Pope Francis, which crashed with a truck in James Craik, Argentina, early Tuesday, Aug. 19, 2014. Emanuel Bergoglio was seriously wounded as two young great-nephews of Pope Francis as well as their mother, the wife of the pope's nephew, were killed in the crash, according to the Vatican and a local police official. (AP Photo/DyN)
Share
Print
Aleteia - published on 08/19/14

Pontiff “deeply pained,” according to Vatican spokesman; asks for prayers.

Three relatives of Pope Francis, including two young children, have been killed in an automobile accident in Argentina, media in the South American country are reporting.

Two great nephews and their mother were killed after their car collided with a truck near the Argentine city of Cordoba. A nephew of the Pope, Emanuel Horacio Bergoglio, 38, who was driving the car, is in a serious condition in hospital after the accident. Bergoglio is the son of Alberto, the Pope’s late brother.

The accident happened at 12:30am local time on a highway in the central province of Cordoba, northwest of the capital, Buenos Aires. The car hit a truck from behind. An investigation is underway.

The family was returning to Buenos Aires after a long weekend getaway.

Vatican spokesman Father Federico Lombardi said "the Pope was informed about the tragic accident. He is deeply pained." He added the pope asks "all who share in his grief to unite with him in prayer."

The Argentine newspaper La Nacion said Bergoglio was driving a Chevrolet Spin and rammed a truck loaded with corn traveling in the same direction of the highway, near the town of James Craik. It identified the deceased as his wife, Valeria Carmona, 38, and two children, one 2 year old and the other 8 months. It said Bergoglio is hospitalized in serious condittion in Villa Maria.

The truck driver, identified as Raul Pombo, 60, was uninjured.