Ferguson Represents Failure at All Levels 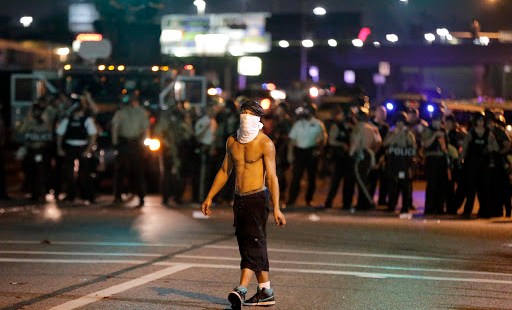 We don’t even know what happened yet.

The particulars of the situation in Ferguson, MO, are still in doubt. On Saturday, August 9, a white police officer stopped two young, African Americans who were walking in the street.  A confrontation ensued between the patrolman, Darren Wilson, and one of the young men, 18-year-old Michael Brown. Witnesses disagree about what happened next.  One version stresses that Brown pushed Officer Wilson back into his car, struck him, and grabbed for his gun.  Another that Brown had his hands raised in surrender when the encounter ended. The unarmed Brown was shot six times, twice in the head, and he died at the scene.

The next evening, a candlelight vigil for Brown deteriorated into looting and vandalism. Thirty people were arrested. On Monday, August 11, the FBI announced that it would open a parallel investigation into Brown’s death. Brown’s parents renounced the violence and demanded justice for their son. Still, there was more unrest on Monday evening. On Tuesday, President Obama weighed in and called for calm. Brown’s companion at the time he was shot said Brown wasn’t resisting and had his hands in the air. By Wednesday, the unfolding events had attracted national and international media attention. Reporters for Huffington Post and The Washington Post were detained. Police lobbed teargas at a crew from Al Jazeera America and arrested a St. Louis alderman.

On Thursday, August 14, the governor of Missouri announced that the Missouri Highway Patrol would take over for the local police, and he appointed an African-American captain to lead the effort. For the first evening that week there was no violence. Vigils were held in cities across the United States. Then, on Friday, the name of Darren Wilson, the officer who shot Brown, was released. That night, the violence resumed. Police responded with tear gas and rubber bullets. The next day, the governor declared a state of emergency and imposed a curfew as evidence mounted that agitators from outside Ferguson – notably Chicago – were responsible for much of the violence. On Monday, August 18, the governor sent in the National Guard, but lifted the curfew as ineffective.

On the 18th, Robert J. Carlson, Archbishop of St. Louis, issued a letter on the Ferguson situation. “I have personally visited Ferguson and Michael Brown’s memorial to offer my prayers for everyone affected by this tragedy,” wrote Archbishop Carlson. “In all circumstances, but especially in these difficult times, we are all called to be instruments of peace through our words and actions. Pope Francis recently stated that, ‘All men and women of good will are bound by the task of pursuing peace.’”

The archbishop went on to announce that he would celebrate a Mass for Peace and Justice at the Cathedral Basilica of St. Louis on Wednesday, August 20. He concluded his letter by asking “all the faithful in the Archdiocese of St. Louis to join me in praying to Our Blessed Mother and to her son, Our Lord Jesus Christ, for peace and justice in our community.”

These purposes are interlocking and mutually dependent. A more perfect union, for instance, cannot be achieved without equal justice under the law. Justice, in turn, can’t be established without domestic tranquility, and vice versa. Viewed through this lens, the ongoing turmoil in Ferguson, a suburb of St. Louis, represents a systemic failure of government at all levels to fulfill these purposes.