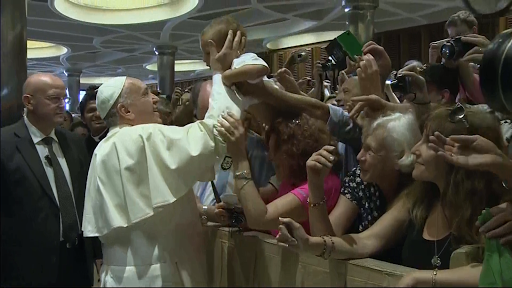 In first general audience since Asia trip, Pontiff thanks world for prayers.

Pope Francis expressed thanks on Wednesday for the prayers and condolences he has received following the death of his nephew’s wife and their two young boys in a car crash in the Pontiff’s native Argentina.

Francis listened as priests expressed condolences in several languages during his weekly public audience at the Vatican.

"I thank you for your condolences for what happened in my family," Francis said. "Even the Pope has a family."

The 77-year-old Pontiff then explained about his family. "We were five siblings. I have 16 nephews and nieces and one of these nephews had a car accident and lost his wife and two little ones and is in critical condition. I thank you very much for your condolences and prayers."

The Pope looked pensive at the start of the audience held in Paul VI Hall at the Vatican, two days after he returned from a six-day trip to South Korea. After renewing his sentiments of gratitude and esteem for the bishops of Korea and for the civil authorities who hosted him, the Holy Father began to focus on the Church he discovered during his voyage.

“The Republic of Korea,” said Pope Francis, “is a country that has had a remarkable and rapid economic development,” which he attributed in large part to the industry and discipline of the Korean people. “In this situation,” he continued, “the Church is the custodian of memory and hope: a spiritual family in which adults pass the torch of faith that they themselves have received from the elderly on to the young people,” of the new generation, so that, “the memory of the witnesses of the past becomes new testimony in the present and hope for the future.”

The Holy Father went on to say that the beatification of 124 Korean martyrs and the celebration of the sixth Asian Youth Day were concrete signs of this dynamic at work in Korea and all throughout Asia. “Dear brothers,” he said, “in the history of the faith in Korea we see that Christ does not erase cultures, does not suppress the pilgrimage of peoples, who, through the centuries and millennia, seek truth and practice love for God and neighbor. Christ does not abolish what is good, but brings it to fulfillment.”

The Pope also addressed the particular role of lay people in bringing the Gospel to Korean shores and fostering the growth of the Church in the country. “The Church took root in Korea and grew largely because of lay people, who saw the attractiveness of the Gospel and sought to live like the first Christians, in equal dignity and solidarity with the poor,” said Pope Francis in the English-language remarks read following his principal Italian-language address.

The Holy Father concluded with a prayer: that the Korean people might continue to grow in faith and love, overcome every division and look forward to a future of reconciliation and hope.

The Associated Press contributed to this report.