Iraqis in Besieged Town Appeal to Army for Help 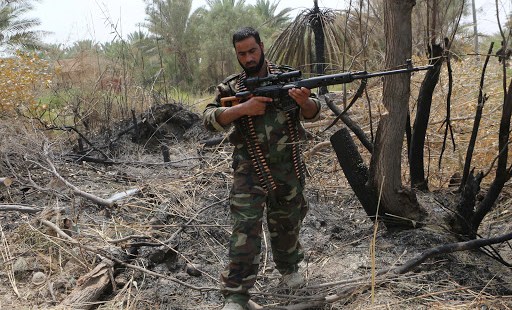 Like Christians and Yazidis, Turkmen targeted by Islamic State for “apostasy.”

BAGHDAD (AP) — Members of a minority Iraqi Shiite community whose town has been besieged by Sunni militants are appealing to Iraq’s military and the international community to intervene to end the siege, a lawmaker said Wednesday as the U.N. prepared to launch a massive aid push to help Iraqis uprooted by the extremists.

The siege of the northern town of Amrili, populated by Shiite Turkmens, is part of a wide onslaught by militants from the al-Qaida-breakaway Islamic State group and their Sunni allies who have seized large swaths of western and northern Iraq this summer. The group has since declared a self-styled caliphate in territory it controls in Iraq and neighboring Syria, imposing its own harsh interpretation of Islamic law.

In Iraq, however, the militants’ rampage suffered a major setback this week when Iraqi and Kurdish troops backed by U.S. airstrikes dislodged the Islamic fighters from a strategic dam near Mosul, Iraq’s second-largest city overrun by the Islamic State in June.

Lawmaker Fawzi Akram al-Tarzi said that nearly 15,000 Shiite Turkmens in Amirli, about 105 miles north of Baghdad, have been besieged for the past two months by militants affiliated with the Islamic State. The siege has left the residents in a dire situation, although the army airdropped some weapons, food and medical supplies recently. The town has no water or electricity, yet the residents are putting up a fierce resistance, al-Tarzi added.

"Amirli is besieged from all sides and calls for help are falling on deaf ears," he said, calling on the U.S. to consider airstrikes like other areas.

Resident Jaafar Kadhim al-Bayati, a 41-year-old father of three, told The Associated Press over the phone that children in Amirli are getting sick and that the town needs more help. "We are starving, we ran out of food and the only clinic is not functioning now due to lack of medicines," he said. He added that a pregnant woman died while in labor this week; she was brought to the clinic but there was no one to help her there.

Like other religious minorities in Iraq such as the Christians and the Yazidis, the Turkmen community has also been targeted by the Islamic State, which considers them to be apostates. Thousands of Turkmens have been uprooted from their homes since the Islamic State took Mosul, the northern city of Tikrit and a spate of towns and villages in the area.

he Islamic State blitz has forced some 1.5 million people to flee their homes since June while thousands more have died, prompting the U.N. to declare its highest level of emergency last week. On Wednesday, the U.N. refugee agency was starting a massive air, road and sea operation to help the displaced, including a four-day airlift with Boeing 747 planes that will bring in aid from Aqaba, Jordan, to Iraq’s northern Kurdish region.

"Conditions remain desperate for those without access to suitable shelter, people struggling to find food and water to feed their families, and those without access to primary medical care," said Adrian Edwards, a spokesman for UNHCR. "Many are still coming to grips with the tragedy they’ve been through in recent weeks — fleeing homes with nothing, and many trying to cope with the loss of loved ones," he said.

On Tuesday, Iraqi troops clashed with militants near Tikrit, former dictator Saddam Hussein’s hometown. The Iraqi military launched an operation in late June to try to wrest back control of Tikrit, but that quickly stalled after making little headway.

The gains made by the militants have brought U.S. forces back into the conflict for the first time since American troops withdrew from Iraq in 2011. America’s renewed involvement on the battlefield was a reflection of the growing international concern over the Sunni extremists’ blitz. Washington began carrying out dozens of airstrikes in Iraq on Aug. 8. But in a horrifying act of revenge for the U.S. airstrikes, the Islamic State released a grisly video on Tuesday showing the beheading of American journalist James Foley who went missing in Syria in November 2012. The militants have also threatened to kill another hostage, U.S. officials said.