The Future of Christianity in Asia 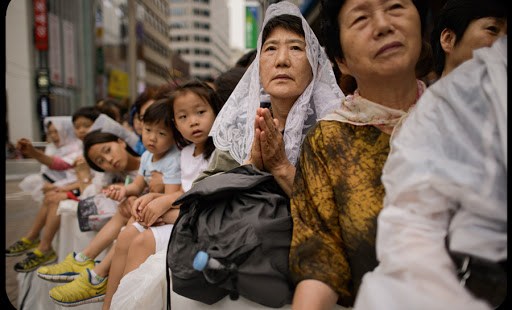 To the amazement of many in the West, Pope Francis has been an enormously popular visitor to Korea, attracting some 800,000 to the main ceremony of his visit. But why are Americans and Europeans so taken aback? Even today, it seems, we still hear residual echoes of that old sense that Christianity is the faith of the West, so why on earth is it so appealing in such different cultures? But that attitude is quite wrong. The Christian story in Asia is very old, and today seems set for a spectacular era of growth.

We would love to know when the first Christian believers first gazed on the Pacific. Certainly by the fifth century, and possibly long before that. Successive Christian churches rose and fell over the next millennium, but the continuing modern story of the Catholic presence in the region dates from the sixteenth century. Pushing west from Mexico and east from India, the Spanish and Portuguese created the world’s first truly global empire. The once-daunting Pacific now became a highway, not a barrier, and Christian missionaries led the way. If a single moment symbolizes the unification of the continents, it was the creation in 1578 of the Catholic diocese of Manila, in the Philippines  – as a suffragan see of Mexico City.

For a century after that date, the trade route from Manila to Acapulco was the central artery of European imperial power, as Mexican silver was traded for Asian spices. Even more significant, the route was the world’s most important axis of missionary expansion. By 1600, Spanish and Portuguese Catholics seemed set fair to convert much of their new Pacific empire. Beyond the Philippines, Jesuit priests were in high regard at the Chinese court, and were winning converts among the ambitious warlords of southern Japan.

At least for a while, the dream of a Catholic Pacific then met terrible obstacles. The mission in Japan was violently obliterated, and the Chinese church fared little better, but the Philippines remained, and the early seeds of a presence elsewhere. The full flowering of Christianity in the region came only in the twentieth century.

Only one major nation is overwhelmingly Christian, but it is an exceedingly important one, namely the Philippines. The country’s population has boomed over the past century, and the present population of 100 million should swell to 150 million by 2050. The Philippines is already home to more than 4 percent of the world’s Christians, perhaps 85 million strong. The nation is a vital heartland of the Roman Catholic Church, with the world’s third largest Catholic population. In any given year, the Philippines accounts for more Catholic baptisms than France, Spain, Italy and Poland combined.

Although exact numbers are controversial, we can also be reasonably sure of a Chinese Christian population of some 70-75 million, perhaps five percent of the nation. Among those believers, Protestants and charismatics are a sizable majority, but the Catholic presence is old-established and substantial. As we have seen recently, Catholics also flourish in South Korea, alongside a sizable Protestant community. Taken together,
Christians make up at least thirty percent of South Korea’s fifty million people: some sources put the proportion much higher.

And there are other less well-known centers. Although Indonesia is the world’s largest Muslim state, it also has perhaps thirty million Christians, with another eight or nine million in Vietnam. Malaysia, Singapore and Taiwan all have solid Christian minorities. When we read the phrase “Pacific Rim,” we might just as well use the term Christian Arc.