Elijah, the Widow and Pizza night 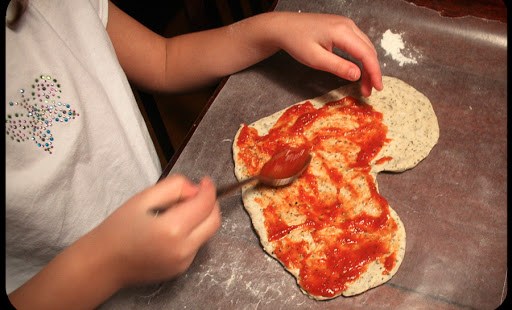 In a world full of suffering, it’s okay to feel joy and gratitude for the miracles of every day life.

Saturday is pizza night around here. Like proper, done right, everything from scratch pizza night. Dough is handmade, sauce is prepared from a secret recipe, and hours are spent on this family meal.

This Saturday, while I was making the dough, I realized we were almost out of olive oil. I mentioned this to my husband, who was deeply shocked that I was going to use vegetable oil in place. The sort of shock you see on people’s faces when you tell them you’re going to drop kick a puppy or something.

“Vegetable oil?” he spluttered, and I shrugged. But as I measured out the three tablespoons of oil, something remarkable happened: I had exactly enough. I delightedly mentioned this to my husband, and said, “It’s just like Elijah and the widow! A miracle of oil!”

He looked at me mockingly, and said, “It’s just pizza, not divine intervention.”

I sniffed in response, stung by his skepticism. And then, as I went to measure out the flour, I sadly realized that what was left in the jar was woefully short of the nine cups needed for the recipe. But, Elijah on the brain, I started measuring it out with foolhardy abandon—if the oil held out, so would the flour.

Sure enough it did—exactly nine cups. A fact which I triumphantly pointed out to my husband, that we had a little reenactment of 1 Kings 17, oil, water, and even a slight drizzle at the end of it all (it’s been a rainy weekend here in New England, so I didn’t put too much stock in that last part). Despite all the miraculous evidence, he remained unconvinced, and I spent an intense 15 minutes talking to him about the hand of God in everyday life, showering us with small, domestic miracles all the time.

A little while later, belly full of pizza and a couple of beers, I idly checked Facebook to see what was going on in social media. There, at the top of my feed, was a story about three nuns in Bangladesh who had been raped (or attempted to be raped, depending on your source) by sixty Muslim men who surrounded the convent, bound and gagged the guards, then assaulted the women until the police came.

My carb-and-alcohol buzz ended abruptly, and on its heels, a long, dark look at my ridiculous assertion that God was showering us with miracles all the time. I imagined myself looking those three nuns in the face and saying such a thing to them. I wondered where God’s miracles were while those women were being terrorized. I knew this was a rehash of the old “If God is good, why does He allow bad things to happen” argument, but it didn’t matter. How do I—how does anyone—find joy in the small miracles of daily life, knowing that such evil is loose upon the world?

This ate at me. And the very fact that it ate at me—oh, poor me that I can’t enjoy my comfortable life because of others’ suffering!—ate at me more. It grew and grew to such a crescendo that finally I heard the word “Accuser” in the noise.

The Accuser. Of course. We all know who that is. And on the heels of that glimmer of understanding, another thing came through. That widow that I’d invoked earlier that evening? The one whose oil and flour miraculously never ran dry while the prophet of the Lord stayed with her? She was surrounded by pain. Her neighbors still suffered from the drought, and while the Bible doesn’t say precisely how many people were fed, it does say that there was food enough for “Elijah, the woman, and her family.” It’s not so hard to imagine that a good deal of people benefitted from the widow’s brush with the miraculous.

And then there’s the death of the widow’s son. How many other people died that day? How many other widows lost their children? Yet it was this one woman who was the recipient of a miracle, and nowhere in the Scripture does it suggest that she should have felt shame that others didn’t get what she was gifted.