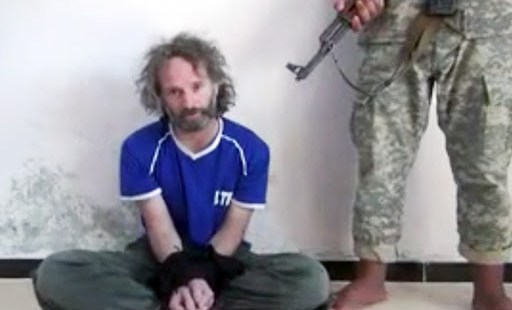 WASHINGTON (AP) — As the U.S. mourned an American journalist beheaded by Islamic militants, the nation found something of a reprieve with the release of another freelance reporter who had been held hostage for nearly two years by an al-Qaida-linked group in Syria.

Peter Theo Curtis, who wrote under the byline Theo Padnos, was freed Sunday, offering consolation to U.S. officials, a journalism community and family members deeply unnerved by the grisly video of James Foley’s beheading in a desolate desert landscape.

Curtis’ release appeared to have been aided by the oil-rich nation of Qatar, which said Sunday that it had "exerted relentless efforts" to win the American’s freedom. Qatar is a leading supporter of the Syrian rebels fighting to oust President Bashar Assad and has been involved in mediating past hostage releases.

Curtis was not believed to be among the hostages held by the Islamic State group that killed Foley. Islamic State was formally disavowed by al-Qaida earlier this year after being deemed too brutal.

Curtis’ release was likely to renew questions about the intentions of different militant groups in Syria and Iraq and how the U.S. should deal with hostage takers.

President Barack Obama was briefed on the release Sunday morning as he wrapped up a vacation in Massachusetts.

"The president shares in the joy and relief that we all feel now that Theo is out of Syria and safe," said White House spokesman Eric Schultz. "But we continue to hold in our thoughts and prayers the Americans who remain in captivity in Syria, and we will continue to use all of the tools at our disposal to see that the remaining American hostages are freed."

A senior administration official said Curtis was released in the Golan Heights, where he was met by U.S. government personnel who were transporting him to Tel Aviv. The official was not authorized to speak by name and discussed the release on the condition of anonymity.

In a video obtained by The Associated Press and dated July 18, 2014, Curtis sits cross-legged on a floor with his hands bound, and appears to read from a sheet placed in front of him on the floor. Addressing the U.S. and European governments, he pleads for them to contact a named intermediary before it is too late.

"They have given me three days to live," he says as a man holding an assault rifle and dressed in camouflage stands next to him. "If you don’t do anything, I’m finished. I’m dead. They will kill me. Three days. You have had 20 days, and you’ve done nothing."

He does not specify any demands, only urging Western governments to make contact with the intermediary.

Foley’s captors had demanded $132.5 million (100 million euros) from his parents and political concessions from Washington. Neither obliged, authorities say.

Betsy Sullivan, a cousin of Curtis, said intermediaries involved in negotiations threatened the family and made ransom demands of varying amounts. But the family said that ultimately they were assured by Qatari representatives than no money was paid for Curtis’ release.

His family said they believe Curtis was captured in October 2012, shortly after crossing into Syria.

"My heart is full at the extraordinary, dedicated, incredible people, too many to name individually, who have become my friends and have tirelessly helped us over these many months," Curtis’ mother, Nancy Curtis, said in a statement from the family. "Please know that we will be eternally grateful."

The Obama administration used Curtis’ release to insist that it was determined to find those responsible for Foley’s death and pursue the release of other hostages.