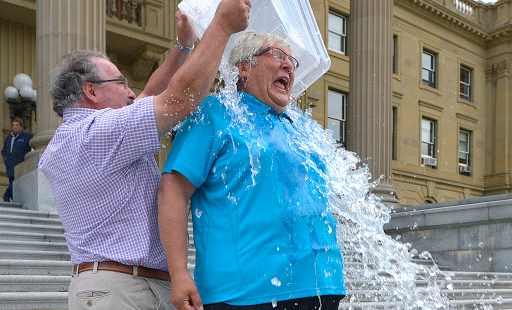 Enough doubt has been cast on whether donations made to the ALS foundation will be used in human embryonic stem cell research that many Catholics are deciding not to take the "Ice Bucket Challenge."

At least one local Church has cautioned its faithful to avoid the campaign.

The Archdiocese of Cincinnati has asked principals at its Catholic schools not to encourage students to raise money for the ALS Association as the ice-bucket challenge becomes an internet sensation, according to Cincinnati.com.

Amyotrophic Lateral Sclerosis, "often referred to as Lou Gehrig’s Disease, is a progressive neurodegenerative disease that affects nerve cells in the brain and the spinal cord," according to the ALS Association. "With voluntary muscle action progressively affected, patients in the later stages of the disease may become totally paralyzed." About 30,000 Americans have the disease.

The archdiocese doesn’t want donations to be sent to the ALS Association, which funds at least one study using embryonic stem cells, said Dan Andriacco, spokesman for the archdiocese. Instead, it suggested sending any money raised in the Challenge to the John Paul II Medical Research Institute in Iowa City, where the research is only conducted using adult stem cells.

Now, at least one bishop has taken up that challenge. Bishop David Zubik of Pittsburgh agreed to get doused, but he’ll be writing a check to the John Paul II Institute, according to the Pittsburgh Tribune-Review,

Alan Moy, M.D., vice president of the John Paul II Institute, outlined their scientific objectives for ALS research, in an email to Aleteia.

"We would try to conduct the following objectives depending on the level of funding that we received," he said.

1. Recruit patients with ALS around the country and obtain skin or fat samples and clinical data.

2. Develop stem cell models of these patents from these tissues—i.e. create “disease in a dish” personalized cell models that can be used to screen experimental drug compounds created around the world and/or drugs that we would design. These cells are created free of human embryos or aborted fetal tissue.

3. From #2, identify the best lead drugs that cure the “disease in a dish” in an ALS patient. Our theory is that if it cures the patient’s disease in a dish that it may have a chance of effectively treating the patient in a clinical trial. The failure rate of drug development and clinical trials for neurological diseases is very high (90 percent).  Not withstanding the ethical issues of embryonic stem cell research, more cost effective and efficient ways of achieving success are needed. We think this approach has potential because it worked in two siblings with a fatal genetic-based neurodegenerative disorder.


4. Generate enough money from our capital campaign of 1 million dollars to build our “clean room” so that we can manufacture one of our adult stem cells to satisfy the FDA to ultimately be used for treating ALS patients.

Bishop Zubik is taking the challenge on behalf of Father Dennis Colamarino, pastor of Christ the Light of the World and St. Joseph’s parishes in Duquesne. Father Colamarino was diagnosed with ALS a year ago.

After an 11 a.m. Mass on Saturday at Holy Name Church of Christ the Light of the World Parish, police will close South First Street in Duquesne, and the bishp and the pastor will be doused with ice and water.

“I see this as an opportunity to give back some of the love and support that I have received over the last 15 months,” Father Colamarino said in a prepared statement.

A spokesman for the Diocese of Pittsburgh defended the bishop’s decision not to donate to the ALS Association.