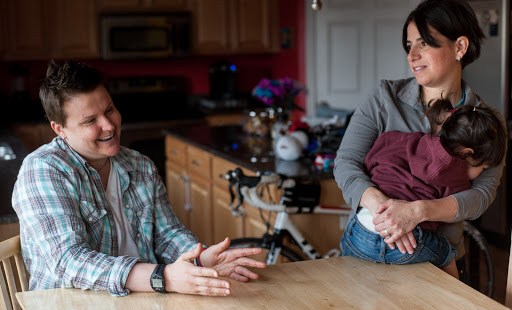 Same-sex couples claim they have burden that heterosexual couples don’t have.

INDIANAPOLIS (AP) — When Niki Quasney felt a piercing pain in her ribcage in March, the oncologist treating her advanced ovarian cancer told her to get to an emergency room immediately.

But instead of making the short drive to a hospital near her home in Munster, Indiana, she drove alone for more than 40 minutes to one in neighboring Illinois. Quasney said she was "terrified" her local hospital might not allow her and her partner of more than 13 years, whom she wed last year in another state, to be together if she suffered a health emergency.

Quasney and her partner, Amy Sandler, are among dozens of couples challenging Indiana’s and Wisconsin’s gay marriage bans in a case being heard Tuesday in the 7th U.S. Circuit Court of Appeals in Chicago. Looming large in the case is the issue of medical emergencies faced by same-sex couples.

The couples are suing for the right to marry or to have their out-of-state marriages recognized in their home states. They argue that powers of attorney and domestic partner registries don’t guarantee they’ll be allowed to make critical end-of-life or life-saving decisions. No legal document, they say, can provide the same protections as a marriage certificate.

Judi Trampf said that became clear when her partner of 25 years, Katy Heyning, suffered a seizure in New Orleans several years ago. The Madison, Wisconsin, couple had health care powers-of-attorney allowing each other to make medical decisions for the other, but that paperwork was at home.

Trampf told hospital workers Heyning was her domestic partner, but she said they refused to allow her to make any decisions without the documents. When Trampf tried to answer questions for Heyning, who was having trouble responding after regaining consciousness, the hospital staff ignored her.

"That’s when I realized I really didn’t have any rights in the situation," Trampf said in a recent telephone interview. "Heterosexual couples don’t have to pull out anything."

Judges have overturned numerous states’ gay marriage bans since last summer, when the U.S. Supreme Court ordered the federal government to recognize state-sanctioned gay marriages. Same-sex marriage is now legal in 19 states and the District of Columbia, and the remaining state bans all face legal challenges.

Federal judges struck down the bans in Wisconsin and Indiana in June, and hundreds of couples married in the two states before those rulings were put on hold following requests by the states’ attorneys general. The cases were combined on appeal because both states’ federal courts fall under the 7th Circuit.

Attorneys for Wisconsin and Indiana will defend the bans Tuesday. Indiana’s attorney general argued in the state’s final brief ahead of the hearing that traditional marriage is in the interest of the state, while a recent brief by Wisconsin’s attorney general contends there is no fundamental right to gay marriage.

Attorneys for both sides expect the issue to eventually land in the U.S. Supreme Court.

The appeals court did, however, let stand a specific order by the lower court that required Indiana to recognize the marriage between Quasney, 38, and Sandler, 37, because Quasney is dying. The women, who married in Massachusetts and have 3-year-old and 1-year-old daughters, are currently the only same-sex couple whose marriage is recognized in Indiana.

"It’s hard for Niki and I to know that there are hundreds of couples that did get married after the court decision … and their marriages have essentially been ignored," said Sandler, who hopes to attend Tuesday’s arguments in Chicago.

Paul Castillo, an attorney for the national gay rights group Lambda Legal, which is representing the couple and several others in the Indiana case, said health care is among the central issues.

"There’s something to be said when a state recognizes a marriage and the dignity that confers on a couple who is undergoing crisis moments, not to be burdened with the possibility that when they seek emergency medical treatment or have to make decisions with regard to end of life, that those will not be honored," Castillo said.