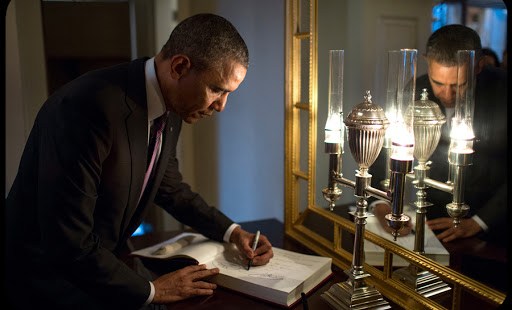 After eight attempts, the administration is still not acknowledging the constitutional guarantee of religious liberty.

It’s déjà vu all over again. The Friday afternoon dump has become a fixture of the Washington scene in the past decade and so. That’s when the Administration chooses to release information about its latest controversial action to the media.

It’s the optimal time for dumping information that’s likely to be unpopular with many Americans, because (1) hardly anyone pays attention to the news on the weekend and (2) by Monday, Friday afternoon’s “news” is stale and not likely to be covered.

Last Friday’s dump was no exception.

The Obama Administration released its eighth new and improved interim proposed version of the accommodation it is grudgingly willing to make for religious non-profits and certain closely held for-profits, which seek exemption from the mandated contraceptive coverage in Obamacare on religious liberty grounds.
“Willing” only in the sense that it has lost now 3 times before the Supreme Court (the decision in Hobby Lobby and two orders, in Little Sisters of the Poor and Wheaton College) and has lost 90% of lower federal court decisions (whether for injunctions or on the merits).

The bright side of being backed into a corner, from the Administration’s standpoint, is that with every new wrinkle in the regs, cases filed on the basis of earlier versions of the regulations may become moot, get dismissed and have to be refiled at further cost to the non-profit plaintiffs. This was the fate of suits brought by four Catholic dioceses, Franciscan U and Liberty U, and the American Family Association among others. And any delay favors the deep-pocket opponent—there being no party with pockets deeper than the collective (hapless) American taxpayer.

For those of you tempted to click to a new article, anticipating that the discussion is about to go all wonky on you, please don’t. Because nothing so resembles the parade of Obamacare contraceptive mandate accommodation regs so much as “Groundhog Day.”

The Becket Fund, which represents at least nine plaintiffs challenging the mandate, brought up the similarity in a post on Buzzfeed.

In that great comedy classic, Bill Murray—an arrogant and jaded big-city reporter who chafed at being assigned to report on the groundhog’s annual weather forecast amidst all the hokeyness of Punxsatawney, PA—is fated to repeat that day until he gets everything right.

We watch him being transformed from a selfish jerk into a true Christian, one who sees the goodness and beauty in others and who now lives solely to enrich their lives.

That’s where the resemblance ends, of course.

The Administration has been inching away from its original position–that only houses of worship would be exempt from the mandate–to its present one, but there’s no realistic hope that this Administration will ever adopt a Christian point of view in defense of religious liberty, especially when it involves “reproductive healthcare.”

Below is a précis of the Becket Fund’s Groundhog Day version of the religious exception and accommodation regs.

To “avoid” its burdening religion, HHS announces a very narrow exception for some houses of worship, but  excludes those that serve people of other faiths and that do almost anything beyond the inculcation of faith..

2. February 10, 2012:  A “Temporary Enforcement Safe Harbor”—exempting religious non-profits for at least 18 months—is announced because the concerns of scores of such non-profits cannot all be resolved prior to implementation.

3. March 21, 2012:  Acknowledging that its original exemption was too narrow, HHS now proposes an “accommodation” for religious non-profits.

4. August 15, 2012:  Even the “Safe Harbor” is too narrow and the Administration admits that, in responding to a lawsuit by Wheaton College.