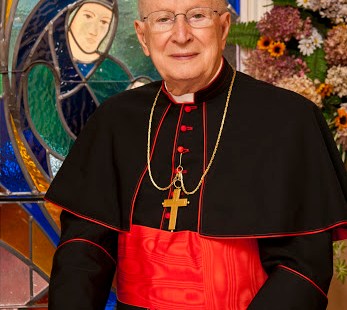 Served as Archbishop of Detroit during 1980s, then oversaw government of Vatican City State.

Cardinal Edmund C. Szoka, the retired archbishop of Detroit, was laid to rest today, six days after his death in Michigan at the age of 86.

Detroit Archbishop Allen H. Vigneron presided at the Mass, at the Cathedral of the Most Blessed Sacrament in Detroit.

Cardinal Szoka served as Archbishop of Detroit from 1981 until 1990 and went on to oversee the government of the Vatican City State under Pope John Paul II and Pope Benedict XVI.

"We mourn the loss of a dedicated shepherd," said current Detroit Archbishop Allen H. Vigneron, who had served as a priest under Cardinal Szoka in the 1980s. "For 60 years Cardinal Szoka gave himself totally to his priestly service of Christ and his Church. He has gone home to the Heavenly Father with our prayers. May the Lord give him the reward of his labors."

Following his retirement from active ministry in 2006, Cardinal Szoka had been living in Northville. He died August 20 of natural causes at Providence Park Hospital in Novi.

Edmund Casimir Szoka was born Sept. 14, 1927, in Grand Rapids to Polish immigrants Casimir and Mary Szoka. His father had immigrated from what is now Belarus, his mother from Poland.

Cardinal Szoka was celebrating his 60th anniversary as a priest this year, having been ordained on June 5, 1954, to serve the Diocese of Marquette.

The Pope then made him a cardinal in June of 1988. Shortly thereafter, he was appointed to oversee economic affairs at the Vatican City State, in April of 1990, and was succeeded in Detroit by Cardinal Adam J. Maida.

The Vatican issued this statement on his death:

Cardinal Edmund Casimir Szoka, Archbishop emeritus of Detroit, President emeritus of the Pontifical Commission for Vatican City State and of the Governorate of Vatican City State, died on Wednesday night, 20 August, at Providence Park Hospital in Novi, Michigan. He was 87 years old. Upon hearing the news, Pope Francis sent a telegram to Archbishop Allen H. Vigneron of Detroit, expressing his condolences and “recalling with gratitude the late Cardinal’s tireless episcopal ministry in Gaylord and Detroit, and his years of service to the Apostolic See and the Vatican City State.” The Pope joins the local community in prayer “in commending the soul of this generous servant of Christ and the Church to the merciful love of God our heavenly Father”