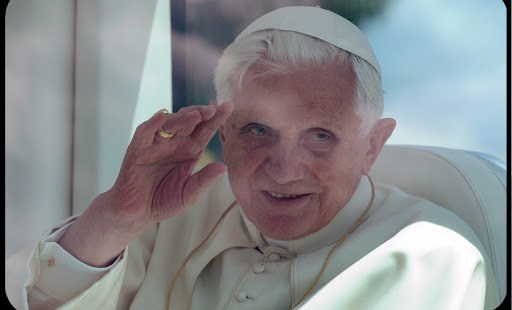 Vatican City (CNA/EWTN News) — Participants in the annual Ratzinger “schulerkreis” study group were overjoyed at seeing the retired Pontiff in good health, noting that they were deeply moved by his homily on the triumph of God's love.

“The homily was very moving. It was the Gospel of the day about Cesarea of Philippi where Jesus asks the apostles, 'Who do you say I am?'” Father Vincent Twomey recalled to CNA Aug. 25.

“Peter answered 'you are Christ, son of the living God,'” to which Jesus responds: “you are Peter and on this rock I will build my Church.”

Father Twomey was one of the participants of this year's Ratzinger “schuelerkreis,” or “students' circle,” which has met annually to discuss topics in theology and the life of the Church since 1978, when their professor Josef Ratzinger – later to become Pope Benedict XVI – was tapped to become a bishop.

This year's encounter was held at Castel Gandolfo Aug. 21-24, with German theologian Karl-Heinz Menke serving as relator. During the main meetings he gave a presentation on the “Theology of the Cross.”

Following the normal discussions, Father Twomey explained that on Sunday the group traveled to the Campo Santo Teutonico chapel in the Vatican for Mass, where the main celebrant was retired Pontiff Benedict XVI.

The main points of Benedict’s homily, the priest explained, were that “today people are always asking who is Jesus Christ.”

“They say he was a great man, a teacher, a revolutionary perhaps. People outside see him in different ways. And that's not a bad thing; that means that Jesus image has spread throughout society and religions,” he went on, “But, to recognize him as the Son of God is a gift of faith.”

Noting how “Our Lord didn't build his Church on a theory or a statement, but on a person, relationship with Jesus,” Father Twomey stated that Benedict's words were “very moving because the Church where we celebrated was near the place where Peter himself gave his final witness.”

“Benedict XVI talked about how the gates of hell would never prevail. The Church is always the weak player, always under attack but the Church always survives because it is not a human, but a divine entity.”

“The cross is the way to the resurrection. The good news is God's love triumphs over evil. Evil will never triumph over good,” the priest continued, explaining that after the Mass participants had a special reception with Father Stephan Horn, 80, who is the key organizer of the annual schuelerkreis.

“What struck us all is that despite being older each year,” Benedict XVI “looks much better, fresher. He's very clear in his mind,” he noted, observing how the former Pontiff stood for nearly an hour and a half during the Mass even though a chair was provided for him.

“He was in good form. There was a good spirit about him.”

Echoing Father Twomey’s sentiments is Secretary of the Pontifical Council for Culture Msgr. Barthélemy Adoukonou, who also participated in the study circle.

“It was extraordinary. As always, it amazed us that in spite of age, and without a prepared text, the Pope (emeritus) gave a homily at a great level, with an extraordinary clarity of mind for his age.”

Composed of about 50 people who studied for their doctorates under Cardinal Ratzinger, the schuelerkreis usually takes place with the 25 to 30 who are able to make it to any given year's meeting.

The circle has enlarged in recent years, establishing a “youth branch” composed of academics who had not studied with Ratzinger, yet who are studying and developing upon his theological work.

The topic of the meeting varies each year; last year was the question of God amid secularism, and the year prior to that, ecumenism was the subject chosen.