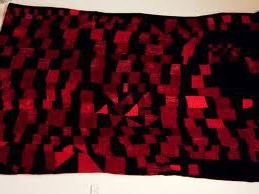 Rosie Lee Tompkins worked only for Christ and created works of enduring beauty.

Effie Mae Howard (1936-2006) was a recluse from Richmond, California who had a mental breakdown, began making quilts, and showed her work under the pseudonym Rosie Lee Tompkins.

“The reason [the work] makes me feel so good is that I put Christ in the center of it,” Tompkins said and from the photos her quilts—abstract, off-kilter, geometric, saturated with color—were stunning and original pieces of art. On a cross-country trip several years ago, I went hundreds of miles out of my way to see an exhibit of her work at the Shelburne Museum in Vermont.

Why did it seem so important to see the work of a person who had not allowed herself to be photographed, tape-recorded, or quoted; who, according to one review, “was plagued by voices in her head;” who suffered from “the sense that she was being watched”? First, because by all accounts Tompkins’ quilts were sublime.

But also because that we devote ourselves to our work even when we’re in pain matters. That we’re faithful to the call of our hearts even though nobody notices or cares, and we’re not making any money, and the suffering continues, matters.

The drive took place during a torrential downpour. The rain slashed down so hard, and I was so exhausted from having driven long distances every day for weeks, that I almost turned around. But I kept thinking of Rosie Lee Tompkins and how, from odds and ends of fabric, buttons, rickrack, sequins, and lace, she’d fashioned a whole strange, mystical existence.

When I finally arrived, The Shelburne transpired to be situated on 45 acres of grounds and featured, among other things, a Blacksmith Shop, a weaving cottage, and the Vermont Settlers House-Cabin. I bypassed all that and went straight to “Something Pertaining to God: The Patchwork Art of Rosie Lee Tompkins.”

I saw at once that the exhibit had been worth the long drive. The whole trip would have been worthwhile for a single quilt: “Hit and Miss Strip,” a 73” by 112” work consisting of irregularly-sized pieces of black and blood-red velvet—squares, triangles—sewn together in jagged, improvisational blocks and rows. The quilt gave the effect of a cross without actually depicting a cross; an effect of controlled chaos, of a pattern, but one that shifted and morphed. Nothing lined up but the pieces all went together. Barely-contained … Sorrow? Love? Erotic energy? Grief? I’d felt the same way when I first heard Stan Getz’s “People Time”: Richness, complexity, depth, and a ton of pain.

In addition to quilts, the exhibit of Tompkins’ work included table runners, chair cushions, clothing, and a pillow cover of a stained-glass window featuring a blond-haired, blue-eyed Jesus wearing a rosette-studded pink robe. She had eventually covered just about everything in her house with pieces of patchwork, often embroidering on her name, Bible verses, and her birthday—9-6-36.

Her work had been hailed by art critics, featured in museums nationwide, and described as the best “painting” in the 2002 Whitney Biennial, but she had never achieved the tranquility she sought. She came to believe that her phone was tapped. She felt that people were watching and listening, as if she lived in “a glass house.” She draped one whole wall of her bedroom with appliquéd crosses, hoping to ward off the voices, but to no avail. In spite of her torment, she continued to sew: “I think it’s because I love them so much,” Tompkins had speculated, “that God let me see all these different colors.”