Pope to Interfaith Soccer Players: Religion and Sport Can Collaborate for Peace 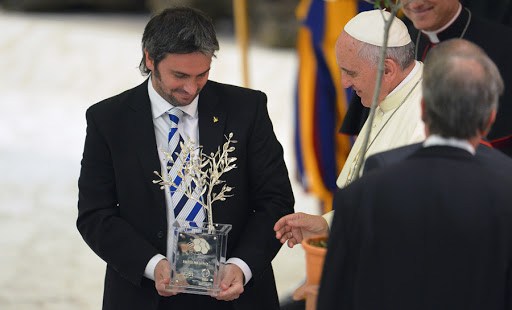 Sporting event will show it is possible to “build a culture of encounter and a world of peace,” Francis says.

An Interreligious Soccer Match for Peace—an initiative desired by Pope Francis—will take place Monday night at Rome’s Olympic Stadium.  The 50-some former and current professional players to take part in the game were received by the Pope in the Vatican Monday afternoon (see photo).

“Tonight’s sporting event,” said Pope Francis, “is a highly symbolic gesture to show that it is possible to build a culture of encounter and a world of peace, where believers of different religions, preserving their identities …can live together in harmony and reciprocal respect.”

The Pope said to “discriminate”  is the same as “contempt” and that with tonight’s match, the players are saying “no to all discrimination.”

“Religions,” he added, are called to be vehicles of peace and never of hatred.”

“Religion and sport,” he concluded, “can collaborate and offer to all of society eloquent signs of this new era in which people ‘will never again raise the sword one against another.'”

Proceeds from the match will go to “Scholas Occurrentes,” an educational institution that promotes social integration and to “P.U.P.I,” a non-profit long-distance adoption charity which helps disadvantaged young people.

In a video message for Brazil’s World Cup Soccer championship earlier this year, Pope Francis said "Soccer can and should be a school that promotes a 'culture of encounter.' One that leads to harmony and peace between peoples.”

With that idea in mind, the Pontifical Council for Culture, together with international Catholic sports associations, has organized a two day seminar to coincide with Monday’s big game—to reflect on the theme: “Sport at the Service of Humanity.”

Organizers want the debate to focus on sports as a means of encounter and dialogue rather than what it seems, in many cases, to have become: a lucrative business for a lucky few and a place for winner-takes-all competitiveness. It’s time in our highly consumeristic society, they say, to replace the money and the medals with the human being.

One of the objectives of the seminar is preparing for the international Vatican Global Conference on Sport and Faith to be held in the Vatican in September next year.

Participants at this week’s seminar will be rooting for players of different faiths at Monday night’s match. Retired captain of Argentina’s national soccer team and Italy’s Inter, Javier Zanetti will be playing in the match, organized in collaboration with the Pontifical Academy for Social Sciences.

Zanetti says it comes as the “explicit wish of Pope Francis,” and describes the soccer match as “a symbolic gesture to help people understand that it is possible to build a world of peace, based on dialogue and respect for others.”