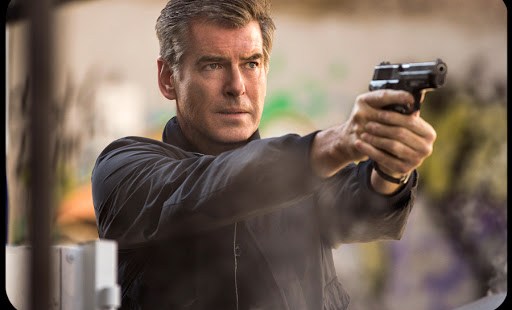 Pierce Brosnan returns once again to the role of a spy.

Take a look at any given poll concerning which actor has portrayed the best on-screen James Bond and it’s almost a certainty that Sean Connery will emerge as the number one choice each and every time. The number two spot, however, is usually up for grabs and depends heavily on the age of the voters.

Take, for instance, a 2012 Economist/YouGov poll in which readers were offered the choice of five different Bonds. Once the results were tallied, Pierce Brosnan came in a solid second as the best 007 for those between the ages of 30 and 44. That’s good news for the makers of “The November Man” as that older demographic is the one to which their film will most likely appeal.

“The November Man” feels oddly old fashioned. No doubt, part of the reason for this is due to the presence of Pierce Brosnan, who returns once again to the role of a spy. This time around, he plays ex-CIA operative Peter Devereaux, one of the agency’s top operatives who chooses to retire after his protégé, David Mason (Luke Bracey), disobeys orders and accidently shoots an innocent child dead. As is often the case in these stories, however, circumstances soon draw Devereaux back into the game.

Tipped off by an old colleague that his former lover Natalia is in mortal danger, Devereaux clandestinely attempts to extract the woman from the clutches of a dangerous Russian general turned potential president. Yes, just as in real life, the Russians are back as the bad guys. “The November Man” is a loose adaptation of Bill Granger’s 1987 novel, “There Are No Spies,” and, despite the movie’s modern setting, the film feels very much like a story from the Cold War era the book was written in.

Devereaux almost succeeds with his mission, but when the Russians determine what is going on, the CIA mysteriously orders Mason to assassinate Natalia. Before she dies, however, Natalia gives Devereaux the name of a missing woman who holds information that could bring down not only the Russian general, but others on the American side as well.

The possession of this knowledge marks Devereaux as a target not only by the Russians, but by the CIA as well, who naturally send Mason to find and kill his old mentor. If the setup involving a legendary agent being pitted against his one-time student seems somewhat familiar, it’s because it’s something of a rehash of the central conflict in “GoldenEye,” the first James Bond to feature Brosnan as super spy.

That underlying current of “been here, done that” permeates the whole of “The November Man.” That’s not to say the movie is overly dull. Director Roger Donaldson is no newbie to the spy thriller, and he directs the movie with efficiency, if not too much flare. In a nod to the aesthetic changes brought to the spy genre by the Bourne franchise, the firefights and fisticuffs in the film are quick and brutal, though Donaldson can’t resist a few instances of Matrix-style bullet-time when someone is about to land a particularly hard punch.

The script by Michael Finch and Karl Gajdusek also does its best to keep things interesting. Befitting a spy movie, there are plenty of twists and turns, with characters flipping sides at a moment’s notice. And yet, even there, it’s hard not to feel as if you’ve seen it all before. None of the twists are all that startling.

What saves the movie is the acting. Filled mostly by TV veterans and non-American actors (a growing trend in Hollywood to help keep budgets under control), the cast turns in solid performances all around. Besides the aforementioned Bracy, there are good performances from Bill Smitrovich as Devereaux’s former boss and Lazar Ristovski as the Putin-esque Russian general. Olga Kurylenko, herself a one-time Bond girl, is particularly nice as the social worker who aids Devereaux in trying to find the missing woman.