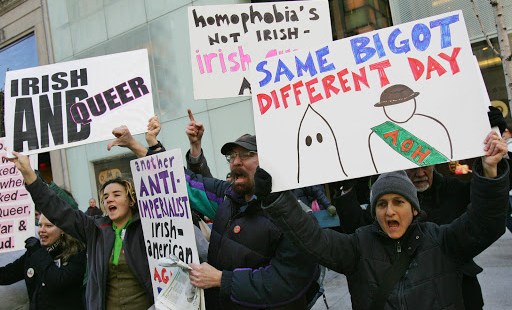 Parade organizers say group to march under own banner for 1st time.

NEW YORK (AP) — Organizers of New York City’s St. Patrick’s Day Parade have agreed to allow a gay contingent to march under its own banner for the first time, making an exception for a group of employees from NBC, the network televising the event.

The prohibition on identified gay groups in the world’s largest and centuries-old New York parade had made participation a political issue. Democratic Mayor Bill de Blasio refused to march this year, and Guinness beer dropped its sponsorship.

The private New York City Saint Patrick’s Day Parade Committee, in a statement made available to The Associated Press, said Wednesday that OUT@NBCUniversal, a lesbian, gay, bisexual and transgender resource group at the company that broadcasts the parade, would be marching up Manhattan’s Fifth Avenue on March 17 under an identifying banner.

Craig Robinson, executive vice president and chief diversity officer at NBCUniversal, said the group had applied to march, but there was no immediate word on why the group was chosen.

"We welcome the parade committee’s decision to accept OUT@NBCUniversal’s application to march and enthusiastically embrace the gesture of inclusion," Robinson said. "Our employees, families and friends look forward to joining in this time-honored celebration of Irish culture and heritage."

OUT@NBCUniversal is described on its website as "the affinity group for LGBT & Straight Ally employees at NBCUniversal." Parade directors voted unanimously to include the group, the statement said.

"It’s about time," said Sarah Kate Ellis, president and CEO of the gay-rights group GLAAD. "Discrimination has no place on America’s streets, least of all on Fifth Avenue. As an Irish-Catholic American, I look forward to a fully inclusive St. Patrick’s Day Parade that I can share with my wife and children, just as my own parents shared with me." She said parade organizers "must be held accountable" on their pledge to open the parade to all.

"While this development is long overdue, inviting one group to march at the exclusion of all others … is a far stretch from the full inclusion we deserve," Schaefer said.

In the past, organizers said gays were free to march but only with other groups and not with banners identifying them as gay. Most marching units in the parade carry identifying banners. There are about 320 units in next year’s parade, the committee said.

The committee said its "change of tone and expanded inclusiveness is a gesture of goodwill to the LGBT community in our continuing effort to keep the parade above politics."

The statement said the parade was "remaining loyal to Church teachings" and Cardinal Timothy Dolan, who is to be next year’s grand marshal, issued a statement Wednesday saying the parade committee "continues to have my confidence and support."

"Neither my predecessors as Archbishop of New York nor I have ever determined who would or would not march in this parade … but have always appreciated the cooperation of parade organizers in keeping the parade close to its Catholic heritage," Cardinal Dolan said. He said he prays that the parade will be "a source of unity for all of us."

Police Commissioner William Bratton marched last year with a contingent of uniformed officers. Gay activists held a news conference before the march to say officers should not participate in uniform.

Uniformed city workers, marching bands with bagpipes, traditional Irish dancers and politicians are traditional participants at the parade, which began in 1762 and can draw hundreds of thousands of participants and spectators.

The committee’s statement welcoming OUT@NBCUniversal said, "Organizers have diligently worked to keep politics — of any kind — out of the parade in order to preserve it as a single and unified cultural event. Paradoxically, that ended up politicizing the parade."