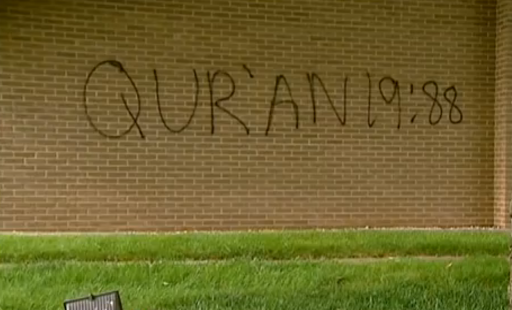 Has jihad begun in US, or is it just a prank? Pastors and imams maintain their relationship still strong.

COLUMBUS, Ind. – In one night, someone, possibly a Muslim extremist, or a group of vandals, spray-painted "Infidels!" and tagged Quranic verses on three Christian churches in the small city of Columbus, Indiana.

The vandals timed their activities so that Christian worshipers attending Sunday morning services on Aug. 31 would see the threatening graffiti as they arrived at church.

"People were upset that the church was defaced," said Father Doug Marcotte, associate pastor of St. Bartholomew Catholic parish in Columbus, one of the targeted churches.

"This has never happened before at our church or any other church in Columbus," Father Marcotte told Aleteia. "I wonder what’s the message? Is it someone who thinks we’re all infidels and wants to make sure we know that? Is it a nasty prank someone is pulling? Is it someone trying to incite people against Muslims?"

Ron Bridgewater, the senior minister at East Columbus Christian Church, which was also defaced, believes it is likely that young people trying to cause trouble are likely to blame.

"My feeling is this is probably some kids trying to get some people stirred up," Bridgewater told Aleteia.

The Columbus Police Department is investigating the vandalism, which also affected Lakeview Church of Christ. Authorities have not identified any suspects. Both local Christian and Muslim leaders told Aleteia that they hope the police will arrest those responsible for defacing the houses of worship.

"We hope whoever this is, that the police will be able to find out who they are and punish them accordingly," said Zulkifly Yusuf, president of the Islamic Society of Columbus, Indiana. Yusuf said that the church vandalism is not reflective of Islam.

"We denounce this action. This is not in line with our religious faith. We don’t believe in trying to vandalize other people’s property," said Yusuf, who also told Aleteia that his small congregation of 60 Muslim families has been active in interfaith activities with local Christian churches in recent years. He said the Muslim community has also invited Christians to the mosque to celebrate Eid al-Fitr, the feast that marks the end of Ramadan.

"No matter how hard some people try to stir up disharmony between Christians and Muslims, it will not deter us from trying to have a good relationship with everyone," Yusuf said.

Judging by the graffiti’s content, the vandals are either sending a frightening message or attempting to sow distrust and animosity between Columbus’ Christians and Muslims at a sensitive time when the world’s attention is focused on warfare in the Middle East, especially Israel’s offensive in Gaza and the Islamic State’s atrocities against Christians and other religious minorities in Iraq and Syria.

"With the news about ISIS, it makes people nervous and scared. People don’t know what to make of it," said Father Marcotte, who noted that the anti-Christian graffiti appeared on a Sunday where the Gospel reading focused on Christ telling his disciples to take up their cross and follow him, and that "whoever wishes to save his life will lose it, but whoever loses his life for my sake will find it."

"The most important thing to remember is we Christians here in Columbus have gotten a little taste of what persecution is," Father Marcotte said. "It shocks us. It wakes us up. Hopefully, it reminds us that we need to lift up in prayer and do everything we can to support our brothers and sisters who are dealing with a lot more persecution than what happened to our church."

Besides spray-painting "Infidels!" on the churches, the vandals also wrote "Qur’an 3:151," a verse that refers to non-Muslims having their refuge in fire: "We will cast terror into the hearts of those who disbelieve for what they have associated with Allah of which He had not sent down [any] authority. And their refuge will be the Fire, and wretched is the residence of the wrongdoers."