Falun Gong Artists Tortured by Chinese Government Are Fighting Back 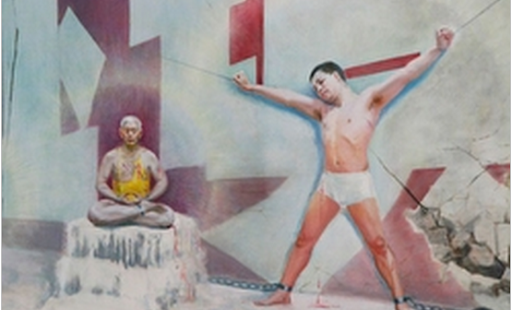 Exposing the persecution of Falun Gong with oils, canvas and clay.

Professor Zhang Kunlun, a well-known Chinese sculptor and painter, spent three months in a PRC reeducation-through-labor camp. Chained to the wall of his cell, he was tortured by the guards, who sometimes used their fists and sometimes used electric batons in their efforts to break his will.

The guards were demanding that he renounce his membership in a Buddhist sect called Falun Gong. Zhang steadfastly refused, even though he knew that each refusal would bring renewed torture.

When he was finally released, bloody but unbroken, he decided to fight back through his art. Gathering together a group of fellow Falun Gong practitioners, some of who had also been imprisoned, he and his fellow artists set about documenting their experience.

The art exhibit that resulted is named after the three principles of Falun Gong, Truthfulness, Compassion, and Tolerance, or Zhen, Shan, Ren in Chinese. It is at once a tribute to the courage of the Falun Gong practitioners under adversity, an exposé of the sufferings of China’s political prisoners, and a mute cry for justice.

The centerpiece is a work by Zhang himself called “Red Wall,” shown above. The two white Chinese characters on the huge red wall mean “persecution” and refer to the persecution of believers of all stripes, persecution that is so intense in China that it makes the country seem like one big walled-in prison. Yet there is a crack spreading down the red wall. Despite its apparent solidity, the wall will not stand forever.

Harder to look at are scenes of torture, of which there are many. One depicts Chinese physicians and police harvesting the organs of a helpless Falun Gong prisoner. The victim was sentenced to die in this horrible fashion not because he committed a crime, but merely because he happened to be a tissue match for someone willing to pay tens of thousands of dollars for a heart, lung, or liver. Thousands of imprisoned Falun Gong have been murdered in this fashion. The victims—of what can only be called “human sacrifice”—are not even properly anesthetized before they are sectioned alive and their organs extracted.

As these two paintings from “The Art of Zhen Shan Ren” exhibit suggest, the ferocity with which the Chinese Party-State has publicly vilified the Falun Gong movement, and attacked, imprisoned and murdered its adherents, almost defies description.

The Chinese Communist Party has been hostile to religion from the very beginning. Indeed, in the early years of the People’s Republic of China it sought to crush the Catholic Church and other organized religions out of existence.

Even today believers, be they Catholic, Christian, Muslim, or whatever, remain second-class citizens. They are not allowed the join the Party, whose official creed is atheism. They cannot hold any sensitive government positions. Most revealingly, they are not allowed to join the People’s Liberation Army. I once asked a faithful Chinese Catholic why Christians would be barred from the PLA. “They don’t trust us with guns,” he bluntly replied.

But the brutal campaign against the Falun Gong goes far beyond the persecution suffered by Catholics, or any other religious group for that matter, in recent years. It is a campaign that is being carried out by a Party-State that seems determined to wipe these peaceful and prayerful Buddhists off the face of the earth. It is a campaign, in short, of annihilation.

This came through clearly in a letter I received several years ago from Minister Counselor He Yafei of the Chinese Embassy. I had invited Minister He to attend a conference that my organization, the Population Research Institute, was holding in Washington, D.C., to discuss human rights in China.