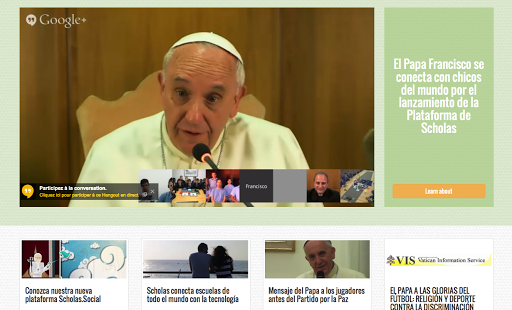 Pope Francis has met with the world meeting of the directors of the "Scholas Occurrentes" organization – an international project based in Argentina that brings together schools and educational networks from different cultures and beliefs. Scholas was a principal sponsor of the “Match for Peace” played in Rome’s Olympic Stadium earlier this week, featuring some of the world’s greatest living soccer stars.

Speaking Thursday without a prepared text,the Holy Father congratulated the Scholas directors on the success of the initiative, and encouraged them to continue in their efforts to build interreligious and intercultural bridges of understanding and brotherhood.

In his remarks, Pope Francis recalled a time when he was in elementary school when his teacher called his mother to complain about his behavior in class.  His mother came to school and after he confirmed to her that he had indeed misbehaved, she told him to apologize to the teacher.

We cannot leave children, the Pope added, at the mercy of a throw-away culture where money and violence prevail.  He acknowledged he often repeats this, “but evidently a throw-away culture has taken root.” He lamented that kids are thrown away because they aren’t given an education or they aren’t wanted: “the birth rates of some developed nations,” he said, “are alarming.” And, “the elderly are thrown away.”

The Pope added that a “system of hidden euthanasia” has also taken root: “that is to say that the social system covers you up to here and then, ‘Die!’”

Another throw-away group has also appeared, the Pope noted: “a whole generation of young people without work, in developed countries.  There’s talk of 75 million young people from 25 years of age downwards without work.”  And this “obliges” us, he affirmed, to take action to counter a culture where the elderly and young people are increasingly vulnerable, and whose financial system places money, rather than the human person, at its center.

Pope Francis himself played an integral role in the founding of Scholas Occurentes, with the mission of improving education and integrating different communities, with a special focus on those with fewer resources.  The organization links schools and educational networks around the world through educational, artistic and sports initiatives.

The Pope said it is important to create an “extensive network, strengthened by truly human connections that supports children,”  offering a place of hope, goodness and encounter.  If a child does not have this, the Pope offered, “there will remain for him only the path of delinquency and addiction.”

Five young people from different countries joined Pope Francis via a video conference –and were able to ask the Holy Father a question.

To one young person from Australia, Pope Francis said young people today can be one of two opposite things: someone who “builds bridges” or someone who “raises walls.”

Explaining how Scholas came about, the Pope said he and the founders pinpointed the three key things that young people need today: education, sports and culture. “Sport is important, he said, “because it teaches people to play as a team”: sports “safeguard you from egoism” – “this is why it’s important to work as a team, study in a group and go down the path of life together, as a team,” he said.

A young person from Istanbul asked the Pope if the future will be better or worse than the present. In his response, the Pope said “the future lies in your heart, in your mind and in your hands.” If they keep these good things mind: if they have “wings to fly, to dream, to create,” and if they have “roots”  to “receive the wisdom of their elders,” the Pope added, young people can build a better future for everyone.

Responding to another young person, the Pope noted that just as there are bridges that bring people together, there exists a kind of communication that destroys.  He warned them to be very wary of groups that seek destruction, seek war and which “do not know how to work as a team.”  The Pope urged the young people to defend themselves from such groups by “working as a team, as a group.”

The Pope concluded his remarks with: “Do not be afraid!” He urged the young people to “build bridges of peace” and to play as teammates to build a better future.  But he advised them, “do not forget” the cultural, knowledgeable and religious “heritage” that the elderly have left them.