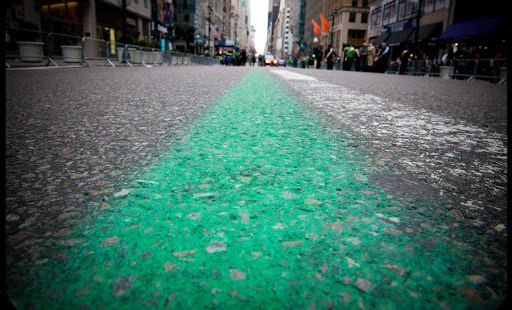 Donohue says if parade’s “Catholic element is completely diluted, I will no longer march.”

Extreme political, cultural and economic forces are colluding to secularize the St. Patrick’s Day Parade in New York City, argues William A. Donohue, president of the Catholic League for Religious and Civil Rights.
"If it gets to the point where the Catholic element is completely diluted, then I will no longer march in the parade," Donohue told Aleteia two days after the Saint Patrick’s Day Parade Committee agreed to allow a group of gay NBC Universal employees to march under its own banner in the 2015 parade.
In a written statement provided to the Associated Press, the parade committee said its "change of tone and expanded inclusiveness" was intended as a "gesture of goodwill" to the homosexual community and an effort to keep the parade "above politics."
The committee did not respond to Aleteia’s requests seeking comment. Despite the committee’s stated intent to keep politics out of the annual St. Patrick’s Day Parade, the revised policy prompted intense controversy as both homosexual rights groups and Catholic commentators blasted the decision in recent days.
Bemoaning the fact that only one LGBT group would be allowed to march in next year’s parade, Empire State Pride Agenda’s Executive Director Nathan M. Schaefer called the policy "disappointing and self-serving."
Meanwhile, several Catholic commentators in media outlets and blogs said the committee had capitulated to the gay agenda and effectively sold out the Catholic nature of an event dedicated to the patron saint of Ireland.

"It’s time to cancel the St. Patrick’s Day Parade and the Al Smith Dinner and all the other ‘Catholic’ traditions that have been hijacked by the world,” Msgr. Charles Pope wrote Thursday in his blog on the Archdiocese of Washington’s website.

Cardinal Timothy Dolan, the archbishop of New York who has been appointed to serve as the parade’s grand marshal in 2015, has also been on the receiving end of criticism. In a prepared statement, Cardinal Dolan said the Saint Patrick’s Day Parade Committee "continues to have my confidence and support." Cardinal Dolan also said that the parade committee, and not the archdiocese, decides who marches in the parade.
"Neither my predecessors as Archbishop of New York nor I have ever determined who would or would not march in this parade (or any of the other parades that march along Fifth Avenue, for that matter), but have always appreciated the cooperation of parade organizers  in keeping the parade close its Catholic heritage," Cardinal Dolan said.
However, the late Cardinal John O’Connor, in 1993, made clear his opposition to the Irish Lesbian and Gay Organization’s efforts to march in the Saint Patrick’s Day Parade under their own banner.
"What others may call bigotry, Irish Catholics call principle," Cardinal O’Connor said, according to published reports.
Since the 1990s, homosexual rights groups have lobbied, and filed lawsuits, seeking permission for LGBT groups to march in the storied parade, which began in 1762 and annually draws hundreds of thousands of spectators. A 1993 U.S. District Court ruling allowed the city’s parade sponsors to exclude self-identified homosexual groups. That ruling was affirmed two years later when the U.S. Supreme Court ruled 9-0  in Hurley v. Irish American Gay, Lesbian, and Bisexual Group of Boston that private organizations organizing public demonstrations do not have to include groups that convey a message the organizers do not want conveyed at their event.
Despite the legal victories, the homosexual lobby has been relentless in its push to have gay groups march in St. Patrick’s Day parades across the country. Those groups’ lobbying have garnered sympathetic media coverage and prompted political leaders to denounce the exclusion of gay groups as bigotry, most notably New York City Mayor Bill de Blasio, who has said that he will not march in his city’s St. Patrick’s Day Parade as long as gay groups are banned.