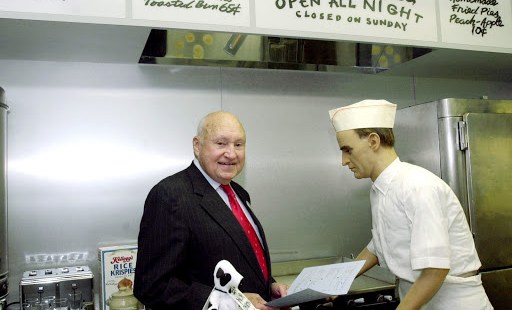 Cathy opened his first postwar diner in an Atlanta suburb in 1946 and by 1967 he had founded and opened his first Chick-fil-A Inc. restaurant in Atlanta. Over ensuing decades, the chain’s boneless chicken sandwich he is credited with inventing would propel Chick-fil-A expansion to more than 1,800 outlets in 39 states and the nation’s capital. By early 2013, the company says on its website, annual sales topped $5 billion as the chain offered up a taste of the South that went beyond chicken to such offerings as sweet tea, biscuits and gravy.

Under the religiously conservative founder, the chain gained prominence for its Bible Belt observance of Sunday. None of its hundreds of restaurants is open on that day, to allow employees a day of rest. Its executives often said the chain made as much money in six days as its competitors do in seven.

Those religious views helped win Cathy and his family a loyal following from conservative customers, but also invited protests when Cathy’s son defended the company’s donations to groups campaigning against same-sex marriage.

Cathy’s son, Dan, currently chairman and president of the chain, had told the Baptist Press in 2012 that the company was “guilty as charged” for backing “the biblical definition of a family.” Gay rights groups and others called for boycotts and kiss-ins at Cathy’s restaurants. The Jim Henson Co. pulled its Muppet toys from kids’ meals, while politicians in Boston and Chicago told the chain it is not welcome there.

The family-owned company has said it has had 46 consecutive years of positive sales growth. Cathy’s $6 billion fortune put him on the yearly Forbes magazine list of the wealthiest Americans in the country. The company listed him on its website as its chairman emeritus after he left day-to-day operations to younger generations.

He attributed his hardworking nature — even as a little boy he made money by selling six bottles of Coca-Cola for a quarter — to growing up poor.

“I’ve experienced poverty and plenty and there’s a lesson to be learned when you’re brought up in poverty,” he said in 2007. “I had to create some good work habits and attitude.”

Even well into his 80s, Cathy was actively involved in the chain’s operations.

“Why would I retire from something I enjoy doing?” Cathy said in a 2007 interview. “I can hardly wait to get here.” He set up a contract with his children that said they may sell the privately-owned chain in the future but the company must never go public.

An opportunity in 1961 led to the development of the restaurant chain’s trademark chicken sandwich when a company that cooked boneless, skinless chicken for airline meals wanted to sell him pieces that were too big for the airline customer’s needs. Cathy cooked them in a pressure cooker and served them in buttered buns.

The sandwich was sold at independent restaurants for a few years before he opened his first Chick-fil-A restaurant at an Atlanta shopping mall in 1967.

“He often talked about how he never planned for Chick-Fil-A to be the size that it is today. For Truett, it was so much more than building a national chain,” Chick-Fil-A Senior Vice President of Operations Tim Tassopoulos said Monday. “It was also a place where Truett could invest in people, giving them a first job, a place to learn about hard work and a place for many to pursue their entrepreneurial dreams.”