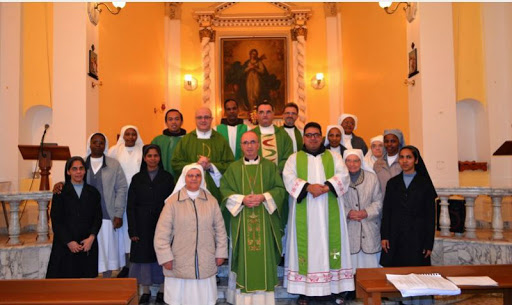 What comes to mind when you hear “Libya?”

Muammar el-Qaddafi, to be sure. And Benghazi, where two years ago on Sept. 11, the U.S. Ambassador, J. Christopher Stevens, and Foreign Service Office Sean Smith were killed during an attack by Islamist militants on the U.S. Diplomatic Compound.

In spite of the Church’s ancient history in North Africa (think St. Augustine), the area has been pretty solidly Muslim for the longest time. But there is still a vibrant Christian community in places like Algeria (Of Gods and Men), Tunisia, and yes, Libya.

With the advance of Islamist movements in Syria, Iraq, Nigeria and North Africa, however, Catholics in Libya are beginning to feel concerned. According to Jonathan Luxmoore, longtime reporter for Catholic News Service, the community there has been left “afraid and unprotected,” local Catholic leaders said, after Islamist militants seized Tripoli and Benghazi, forcing the country’s elected parliament and government to flee.

Franciscan Father Amado Baranquel, vicar of Tripoli’s Franciscan community, said most Christians were afraid to leave their homes because they feared being abducted.

“There’s much lawlessness now, and we have no protection or security. Most Masses are having to be celebrated in private houses and apartments like in ancient times,” he said.

The priest spoke as fighting continued between rival Islamist and pro-government forces in the Libyan capital and the eastern port city.

Just last week, Fides news agency reported a different scene, quoting Bishop Giovanni Innocenzo Martinelli, Vicar Apostolic of Tripoli as saying, “The situation, to a certain extent, is under control, there is more serenity and calm than just a few days ago, and we no longer hear the explosion of bombs. Let us hope that with the grace of God the situation may remain as it is…. So far, as a Christian community, we have had no trouble. Our people, although few in numbers, come to church, we are still able to experience the joy of coming together. Next Friday we will celebrate the feast of Saint Teresa of Calcutta and we expect the faithful in large numbers.”

But the bishop added, “Please continue to pray for Libya, that we may find peace once again.”

Indeed, the situation isn’t hopeless, according to Luxmoore, who quotes Father Baranquel as saying local Muslims had been “friendly and sympathetic” toward Catholics, often arranging rides for them in private cars and warning of possible dangers.

Church property was being guarded and Catholics had been cautioned not to travel because of roadblocks set up by the Islamists, he said.

“To whom are we accountable, and who can we turn to for help? We won’t know till we know who’s governing. Until the United Nations does something, it’s those with weapons who’ll dominate and rule here,” he explained.

Luxmoore explained that Tripoli was captured in late August after fighting by the Dawn of Libya militia group forced the government and parliament, elected in June, to flee to Tobruk, near the Egyptian border.


Bishop Sylvester Magro, leader of the city’s Catholic community, said he had had no contact with Islamist groups, and counted on the Vatican’s nunciature in Malta, which is responsible for the church in Libya, to negotiate on behalf of Catholics.

Bishop Magro told CNS on September 9 that he was not aware of any “anti-Christian pressure” in Benghazi, but added that other Christian communities, including the Coptic and Greek Orthodox churches, had closed churches and evacuated clergy.