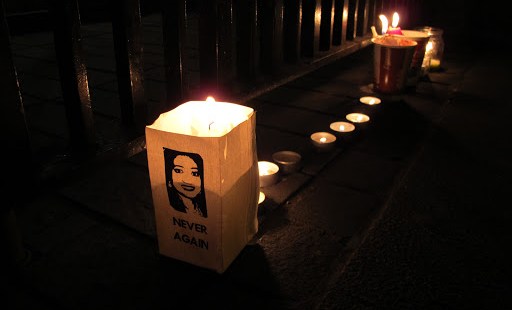 Savita Halappanavar’s death led to abortion being introduced into law for the first time.

Ireland’s Health Service Executive (HSE) has confirmed that disciplinary action has been taken against nine staff members at University Hospital Galway following an investigation into the death of a woman who had been refused an abortion there.

Indian dentist Savita Halappanavar, 31, died from septicemia on Oct. 28, 2012, a week after she was admitted to University Hospital Galway while 17 weeks pregnant and miscarrying.

Her death was widely reported as a consequence of her having been refused an abortion that could have saved her life, with a nurse in the hospital having told her at the time, “This is a Catholic country.”

National and international outrage at her death formed the backdrop to Ireland’s controversial Protection of Life During Pregnancy Bill which introduced abortion into Irish law for the first time.

At the time, Ireland’s bishops pointed out that “Where a seriously ill pregnant woman needs medical treatment which may put the life of her baby at risk, such treatments are ethically permissible provided every effort has been made to save the life of both the mother and her baby. Whereas abortion is the direct and intentional destruction of an unborn baby and is gravely immoral in all circumstances, this is different from medical treatments which do not directly and intentionally seek to end the life of the unborn baby.”

“Current law and medical guidelines in Ireland,” they added, “allow nurses and doctors in Irish hospitals to apply this vital distinction in practice while upholding the equal right to life of both a mother and her unborn baby.”

Nothing in Catholic teaching, in short, could have led to Halappanavar’s death.

Three separate investigations have since taken place, with the Inquest and reports by the HSE and the Health Information and Quality Authority all finding that Halappanavar’s death was due to a series of failures following from an initial failure to identify an infection Halappanavar had when she was taken into hospital, further shortcomings continuing over the following days as she was developing septic shock. Not one of the three investigations identified a failure to terminate Halappanavar’s pregnancy as a factor in her death.

The HSE stated that some of the disciplined staff had been issued with warnings, with others being directed towards counselling, training, and mentoring; none has been dismissed or suspended, and the other 21 staff members who treated Halappanavar have been told they had no case to answer.

Other investigations into Halappanavar’s treatment are being conducted by medical regulatory bodies, with neither the Medical Council nor the Nursing and Midwifery Board having yet said what action they intend to take against staff. Halappanavar’s widower, Praveen, is also bringing a civil suit against both the HSE and his wife’s obstetrician.

That Savita Halappanavar’s death was a tragedy is not in doubt. What subsequent events, including today’s, have shown is that there is no evidence that she died because she was refused an abortion, and that Ireland’s first regulatory framework for abortion was introduced against the background of a national frenzy sparked by a journalistic fiction.