Part 4 of A Pilgrimage Journal.

The first time I ever went backpacking, travelling by rail around Europe nearly twenty years ago, before everyone had mobile phones and internet access, never mind both in the same device, more experienced backpackers told me that it tended to take about a month before you really got detached from home and focused on where you were. It took that long, they said, for you to leave aside your domestic preoccupations and habits. 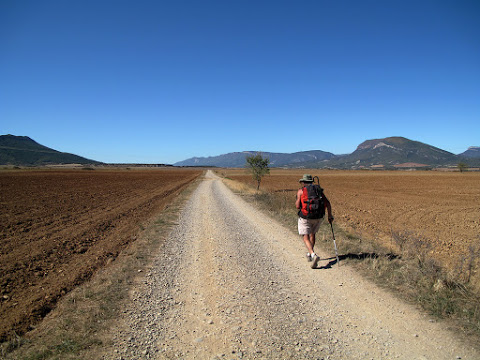 The Camino, I think, works much faster than that, possibly because the routine and rigour of the day force pilgrims to focus on the brute realities of walking, washing, sleeping, and eating, keeping them always in the present. It didn’t take long before home seemed very far away from me, and were it not for the discipline of praying for people, I’m not sure I’d have thought of it much at all.

There was, however, no danger of that. Before I’d set out, dozens of friends had asked me to pray for them on the Camino, and especially when I got to Santiago, and I knew so many others – family, friends, and even just people I knew of – needed support, so whenever I dropped back or walked ahead on my own, or even just fell silent in company, I had work to do.

The Rosary, in the end, proved the best tool for the job, as it so often is, and I was able to group intentions together by decades, keeping the mystery in mind at all times but naming the intention as I offered up prayers for the recently bereaved, the dead, expectant parents, godchildren, the ill and the recovered, those discerning vocations, people who had helped me and people who had hurt me, my former brothers in religious life, and so many others,  including those who’d asked me to pray for them with the cryptic assurance that God knew why. I didn’t dwell on home when walking through Spain, but I carried it with me every day.

After León the road continued along flat and dusty paths under a blazing and almost wholly shadeless sky to lonely little Vilar de Mazarife, where our nine-strong "Camino family" was together for the last time. The long trek to Astorga the next day took a toll on us, with Carlos and Steve falling behind and most of us who made it in arriving late, some just in time to sleep in the chapel attached to the municipal albergue, and the rest resorting to hotel rooms.

The following day saw Chris, Suus, and me walking by the roadside in the morning, making up songs as we went and then subjecting Hannah and other pilgrims to them over lunch. The terrain began to change after that as we moved uphill through rough paths amongst scrubby woodland, passing by hundreds of small wooden crosses made from twigs and woven into a wire mesh fence, something I’d last seen outside Logroño. Eventually we caught up with Sorren, Diana, and Jeanne at Rabanal del Camino, where a man dressed as a knight sat by a tent with his pet eagle, Julie. We all posed with the bird, donated money to go to a local hospital, and made sure to have our credencial stamped.

Despite having originally planned to stop at Rabanal, we climbed further uphill to Foncebadón, an old pilgrim village that even a decade ago had been almost dead, but which is being restored to life by the extraordinary growth in the Camino’s popularity – barely 60,000 pilgrims walked to Santiago in 2000, for instance, but more than 200,000 reached the city last year. If the previous day had drained us all, somehow this one had revived us, and as we sat in the lush green grass outside our albergue, surrounded by puppies, goats, and horses, it was hard to believe that we’d left the Meseta behind.

Though we’d been told we could have a dorm to ourselves, it hadn’t worked out that way. We’d wound up sharing our room with a few others including a Czech couple, one of whom spent a long time on the phone, struggling to explain to a friend in New York what she was doing. After a while she appealed to Jeanne for help, so Jeanne did her best to sum up the Camino, saying that "people used to do it for religious reasons, but nowadays most people do for fun." 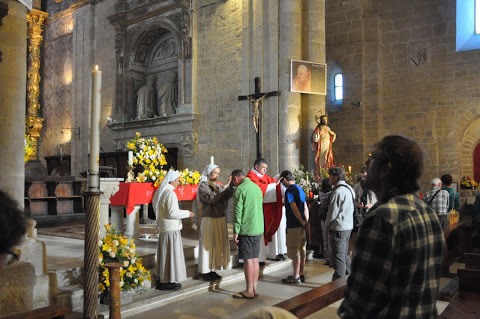 I wasn’t sure she was quite right, but it seemed as good a summary as a quick phone call was going to manage. It’s clear that fun is part of the modern Camino, just as Chaucer makes clear it was for medieval pilgrimages, but I’m not convinced that’s why people do it. I got the impression that people were walking for all sorts of reasons: to see Spain, to face the physical and mental challenges of the Way, to give thanks, to ask for something,  to lose weight, to lose habits, to simplify their lives, or simply because they said they would. Often people walked with a mix of motives, but more than anything, I’d found, people did the Camino in search of clarity, knowing that with a month or more of walking they’d have time to think without the distractions of home, and hoping to find answers in that clarity.

The next morning we set off with the sun at our backs for the short climb through the Pass of Irago to the highest point on our Camino where the iconic Cruz de Ferro, a rust-spotted iron cross on a tall wooden pole, stands on a cairn of stones brought there by pilgrims, each signifying a prayer of one sort or another.  The origins of this tradition are unknown – some think it was a Roman custom, with the mountain being sacred to Mercury, the god of travellers and boundaries, whereas others think it was an indigenous tradition – but however it began, it has been a Christian practice for centuries and scarcely a pilgrim passes now without leaving a stone there. 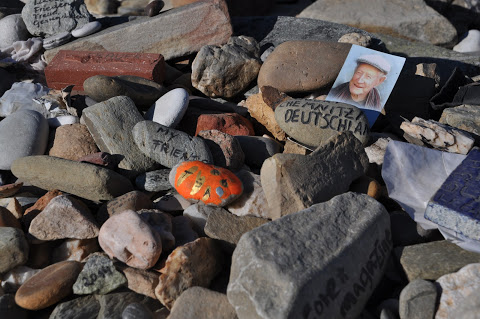 I’d meant to bring a stone from Ireland, but had forgotten it, so had picked one up while crossing the Pyrenees. After adding it to the pile, and kneeling in prayer, I stepped back and stood in silence, continuing in my prayers but also musing on how the cross was both a tourist trap, buzzing with pilgrims and passers-by posing and taking photographs, and a place of quiet contemplation and intense privacy, full of people kneeling, crouching, and standing in sorrow and gratitude and hope.

After a bit I made my way over to one of the others who I knew had had a lot to bring before the cross. "I’m okay," she said, nodding sadly, and I put my arm round her. Moments later Sorren did the same from the other side and the three of us stood bound together in silent solidarity as pilgrims all around us brought their pain to the Cross.

We spent far longer there than we expected, before putting our packs back on, gathering our sticks, and picking our way downhill. It was a long, treacherous, exhausting, glorious climb, but we all made it down to the idyllic town of Molinaseca without turning any ankles. Unfortunately, once in Molinaseca it became clear that my blisters had become unbearable, and walking even a hundred metres down the flat streets was agony. Grudgingly I accepted a lift to Ponferrada, there to have my feet patched up at the local hospital.

I’d long understood that there was no place for ego on the Camino, but it was a real battle to accept that lift. It had become a point of pride for me that I’d walk the whole way from St. Jean to Santiago, carrying my pack as I went, and I felt genuinely ashamed even to be in a car even for just three kilometres. Talking to other pilgrims who’d done the same thing at one point or another, it became clear that this was one of the classic struggles of the Camino, where you have to admit that sometimes you just aren’t strong enough to go on without help. 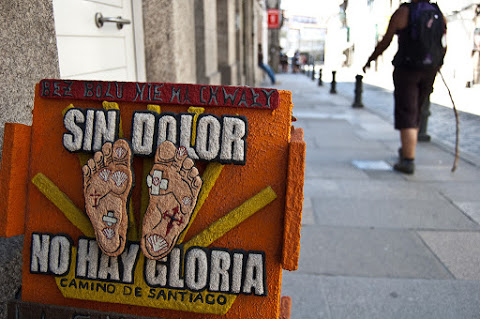 The hospital did a fine job, though, and difficulties with the 98˚F afternoon heat aside, the following day’s walk to Villafranca del Bierzo, taking us past Ponferrada’s vast Templar fortress and a succession of small villages, was easy enough. There comes a point, I’d read on a friend’s blog before setting out, where you stop walking the Camino and "the Camino walks you";  I wasn’t sure I was there yet, but I wasn’t far off it.

We celebrated Chris’s birthday in Villafranca, joining Steve, who had started the day fifteen kilometres behind us and caught up, in the town’s main square. From then on it was hard to think of him other than as the guy who’d braced his knee and walked forty kilometres to get to a friend’s birthday. We met each other on the road the next morning and walked together to the foot of O’Cebreiro, the steepest climb since the Pyrenees. Rather than tackling such a mountain in an afternoon sun that looked set to rival that of the previous day, we stopped instead at the little village of Herrerías, where the girls had booked beds for us all.

Chris arrived a few hours later, and the next day he, Steve, and I set out before five in the hope of seeing the sunrise from the top of the mountain. Climbing in the dark proved beyond me, though, so we slowed down and instead watched the dawn while crossing into Galicia on the mountain’s gentle upper slopes. We saw the misty valleys around us bathed in golden light just before we strolled into the little village at the top for a triumphant breakfast. 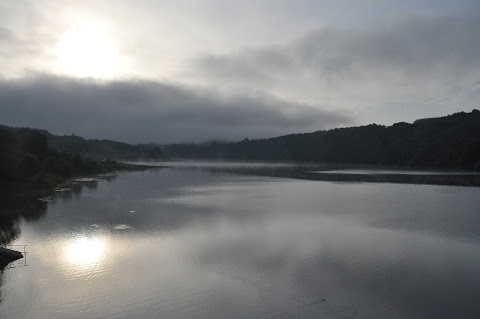 The village was beautiful, but thronged with pilgrims, and after breakfast we took refuge in the church. Steve said his Office from his phone while Chris and I sat in silence before the crucifix. To the side of the altar is the chalice depicted on Galicia’s coat of arms and famously used in 1300 by a visiting priest who’d been saying Mass without believing in the real presence, only to be astounded to witness the literal transformation of the bread and wine into flesh and blood as he said the words of consecration. After kneeling by the chalice, we lit our candles, quietly hoisted our packs, and left.

Santiago was only a week away.