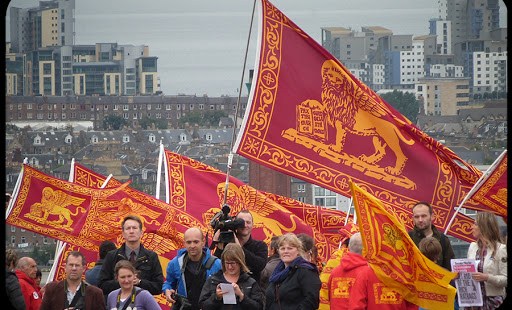 Less than 24 hours after the death of Ian Paisley and just days before Scotland’s independence referendum, 15,000 of Paisley’s fellow Orangemen took to the streets of Edinburgh to declare their support for Scotland remaining within the United Kingdom it first forged with England in 1707.

Taking its name from the Dutch William of Orange who secured the English crown by defeating the Catholic James II at the battle of the Boyne in 1690, the Orange Order, formally the Loyal Orange Institution, was formed in 1795 in what is now Northern Ireland with the aim of promoting Protestant supremacy.

There had been concerns that the Saturday morning march would inflame sectarian tensions, and the cross-party pro-union campaign Better Together distanced itself from the event, encouraging mainstream supporters of the union to avoid it. Nonetheless, there was no violence, despite one of the banners on display bearing the words "Protestant Action: No Popery."

Ironically, when asked in June about the conflict between Catalonia and Spain, Pope Francis had cited Scotland as an example of a country whose case for secession was not obvious and needed to be considered carefully.

Saying that all division worried him, and that while some countries, like Yugoslavia, "couldn’t even be stuck together with glue," other cases, such as those of Scotland, Padania, and Catalonia were not so clear. "There will be cases that will be just and cases that will not be just,” he said, “but the secession of a nation without an antecedent of mandatory unity – one has to take it with a lot of grains of salt and analyze it case by case."

Subtly but undeniably embodying key principles of Catholic social teaching, in which the principles of subsidiarity and nationality should be weighed against the principles of solidarity and prudence as well of the role of political authority in promoting the good life, Pope Francis’ comments foreshadowed those of Edinburgh’s Archbishop Leo Cushley who two weeks ago asked Scotland’s Catholics to approach the independence debate in light of Catholic social teaching.

Reminding his flock of their duties to work for peace, integral human development and authentic human rights – including freedom of conscience and religion – and their obligation to care for the poorest and weakest, Archbishop Cushley urged them as Christians "to be citizens who contribute positively to the common good and who strive always to consider others and their good before our own."

Whether Scotland’s 850,000 Catholics, who make up 16% of the population with just 150,000 attending Mass on a typical Sunday, will heed such advice remains to be seen.  Polling in recent days shows just how difficult it is to predict the outcome of Thursday’s referendum. Excluding undecideds, one poll pointed to a 53-47 vote for continued unity with another commissioned by Better Together signalling a 54-46 vote to that effect, but a third poll with a smaller sample size suggested that there could be a 54-46 vote for independence.

With 97% of eligible voters having registered to vote, and perhaps more than one in ten voters not having yet decided how they will vote, this referendum really is too close to call.