Hail, O Cross! Our Only Hope! 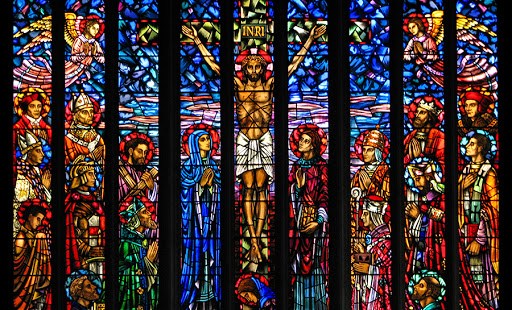 The “punishments” of God are true blessings, pointing always to the cross and our salvation.

In case you missed it, please skim through the First Reading for Sunday’s Feast of the Exaltation of the Holy Cross:

With their patience worn out by the journey,
the people complained against God and Moses,
“Why have you brought us up from Egypt to die in this desert,
where there is no food or water?
We are disgusted with this wretched food!”

In punishment the LORD sent among the people saraph serpents,
which bit the people so that many of them died.
Then the people came to Moses and said,
“We have sinned in complaining against the LORD and you.
Pray the LORD to take the serpents from us.”
So Moses prayed for the people, and the LORD said to Moses,
“Make a saraph and mount it on a pole,
and if any who have been bitten look at it, they will live.”
Moses accordingly made a bronze serpent and mounted it on a pole,
and whenever anyone who had been bitten by a serpent
looked at the bronze serpent, he lived.   (NM 21:4B-9)

What a whiny, cranky bunch those Israelites were—or we are, to be honest, since we dare not read the account of the Exodus and not see ourselves in it! But, poor Moses. Look at what he had been putting up with, and, by this point, for almost forty years! “We are disgusted with this wretched food!” they moan, and not for the first time.

To show a little sympathy, it had been a long journey with many hardships. (They had just recently lost a battle because they hadn’t listened to God.) But it hadn’t been all bad. After all, God had freed them from slavery, parted the Red Sea for them, crushed their enemies, given them mysterious and miraculous food—Manna—as well as quails (they taste like chicken), and made water spring forth from rocks in the middle of the desert, along with quite a number of other miracles He worked for them; so, a little gratitude and trust wouldn’t have been too much to ask for. But no, there was just more complaining.

Although it’s not possible to date this event in the First Reading precisely, by now we’re pretty near the end of the 40 years. And this generation of the Israelites—many of whom had been born during the journey and had never seen Egypt—was pretty cantankerous (like their parents, who had grumbled pretty much from Day One) even though they had grown up surrounded by signs of God’s power, presence and love.

So, they whine, as their parents had many times, “Why did we ever leave Egypt? Sure, we were slaves there, but at least we had good food. Let’s go back!”

And God answers their prayer! Not, to be sure, in any way they could have ever expected. He sent the saraph serpents to bite them. Saraph—related to the word Seraphim—means fiery or shining, and refers perhaps to the fiery pain of their bite, or perhaps to something greater. …

Now, the text says, “In punishment the Lord sent the serpents,” but we need to be very clear about what the Scriptures mean when they say, “God punishes.” There is nothing vindictive in His action, nothing mean-spirited or vengeful; He does not get “angry” as we do; His love never lessens or changes. True, the Scriptures often use the word “anger,” but it is not to be confused with what we understand by anger.

A “punishment” from God, or a “curse,” is, at the deepest level, no different than a “blessing.” The difference is only in where we find ourselves and how we are prepared to receive it. There is nothing of the sentiment “since you didn’t do what I wanted, I will now make you suffer!” in any response the Lord ever makes to His people. This false thinking, which perverts the true nature of God’s love (which is never capricious), has caused much suffering to many people.