The Road to Compostela—The Great Cathedral of St. James

Part 5 of A Pilgrimage Journal.

A couple of hours after leaving O’Cebreiro we stopped for lunch, soon to be joined by the Canada-based Irish couple Tom and Frances, with the girls following shortly afterwards. Together we set off for Fillobal, one of the 30,000 tiny hamlets that dot the Galician countryside. A storm reminiscent of my first week on the Camino started as we were settling into our little albergue. Aside from a few droplets at lunch time, this was the first rain I’d seen since before I’d reached Santo Domingo more than two weeks earlier. 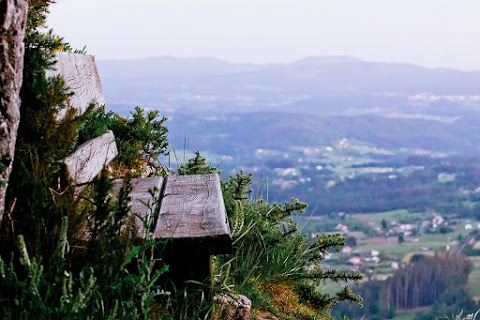 OndasDeRuida
We’d see a lot more before the Camino was over: the Galician countryside is lush, grassy, and forested, and isn’t that green by accident.

The rain staved off the next day as we wound our way through Triacastela, wooded hills, and a succession of hamlets, with the heavens only opening as we reached the outskirts of Sarria, our target for the day. Despite the weather the town was abuzz with life, the locals strolling among market stalls or preparing the streets with petals and pine needles for the following day’s Corpus Christi procession. By then we’d be on the road again, however, so Steve, Suus, and I made our way down to the nearest church for the vigil Mass instead. Chad and Mason, two Colorado brothers we’d first met in Carrión were there, and Chris and Miriam, a couple from North Carolina I’d originally met the day after meeting the brothers, and not seen since León.

As we set out on Sunday, it was clear that the Camino had changed. Little more than a hundred kilometres from Santiago, Sarria is the starting point for just over a third of those following the French route – the Camino Francés – to Santiago. The path out of town was crowded with unfamiliar figures, all conspicuously clean and fresh, their packs tiny and their boots shiny and new, unlike ours which had been reduced to a battered, broken beige.

It was hard not to be snooty about the newcomers, many of whom were sending their bags ahead rather than carrying them, staying in hotels as a matter of course, and doing the bare minimum necessary to receive their Compostela certificate in Santiago.  It seemed ridiculous to us that so many people could basically turn up at the last minute, stroll to Santiago, and get the same affirmation as pilgrims who’d spent five weeks or more trekking there.

"I feel as though there’s something in the Bible about this kind of thing," remarked Chad, when I mentioned it to him a couple of days later. "Yes, the parable of the workers in the vineyard," I conceded, "I know. And that’s it, really: other people’s pilgrimages are none of our business. Even if the way somebody else gets to Santiago doesn’t sit right with me, that’s my problem, not theirs. We have our own Caminos to walk, and should just concentrate on them."

The road to Portomarin wasn’t particularly long, but I found it tough, with the afternoon sun taking a heavy toll and with the landscape doing little to urge me on. If earlier on the Camino the sight of a steeple meant that there was a village ahead, with somewhere to rest, and refill water bottles, and have a coffee or talk to people, here it simply meant that there was another picturesque hamlet ahead, with little or no reason to stop.

I felt ill by the time I crossed the bridge and climbed the steps to Portomarin, and worse when I set out again the following morning, but after a break two hours into my walk I picked up a bit and made slightly better time, chatting as I went with an Irish girl who was walking with her family, including relations from America. This, I suddenly realised, was a Camino experience that long-distance pilgrims like myself couldn’t share: if you want to travel with your family, and make sure you’re together at the end of the day, long distances are impractical and booking ahead