In Trafalgar Square, Thousands Rally for Scotland to Stay in Union 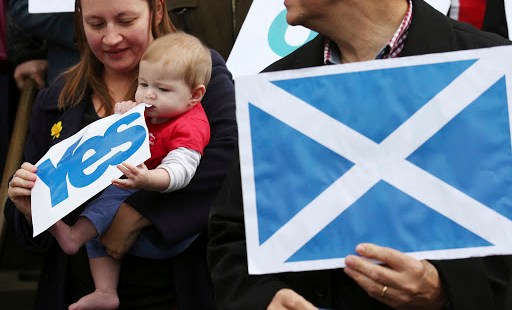 Bob Geldorf, Eddie Izzard and others seek to sway voters in Thursday’s referendum.

Waving Union Jacks, Saltires, and banners bearing the Welsh dragon and the rampant lion of Scotland, as well as home-made signs saying "Don’t break up with us" and "Please stay,” thousands of people gathered in London’s Trafalgar Square on Monday evening to appeal to their fellow Scots to remain in the United Kingdom.

The rally had been organized at short notice. Historians Dan Snow and Tom Holland, who had previously marshalled the “Let’s Stay Together” letter originally signed by hundreds of celebrities, including Judi Dench, Patrick Stewart, and Stephen Hawking, and now signed by more than 100,000 of their fellow Britons, first thought of the rally just days ago.

Speaking on Channel 4 News, Snow explained that it was right for the Scots to decide whether they should be independent or continue to be part of the United Kingdom, but that one key question was not being properly addressed, that being how the Scots’ fellow Britons felt. On this issue, he said, “There was deathly silence: our politicians weren’t representing us properly.”

A recent poll for the Observer found that 63% of people in England and Wales hope that Scotland votes on Thursday to remain in the union, with only 19% supporting Scottish secession.

Holland, who as part of Britain’s Authors Cricket Club had to abandon a match against a Vatican team in order to take his place at the rally, told Aleteia that the event was “a celebration of Anglo-Scottish friendship.”

“Obviously,” he said, “I hope it will serve to reassure voters in Scotland who are wondering whether the English, Welsh, and Northern Irish want them as fellow citizens that we do. “

“And if it’s a Yes vote,” he added, “then it will serve as a public statement of affection and admiration that I hope will stand us all in good stead amid what will doubtless be painful divorce proceedings.”

Some have claimed that the debate in Scotland has descended into mudslinging, something First Minister and leader of the independence campaign Alex Salmond denies, saying that aside from a few hotheads on both sides, the debate has been “peaceful and joyous.” The Let’s Stay Together rally certainly seems to have been a friendly and good-natured affair. “With the possible exception of Bob Geldof’s swearing, that was a remarkably polite rally,” tweeted writer Niall Gooch, who in a recent Catholic Herald article lamented an online tendency to assume that people who disagree with us are stupid, ignorant, or malevolent.

Accusing pro-independence Scots of selfishly trying to resolve their problems by taking an easy opt-out clause, Irish-born Geldof insisted, “This argument needs to be had amongst us all.” Others pointed out the irony of Geldof decrying nationalism before a crowd full of people waving Union Jacks.

Geldof’s declaration that “we’re against all borders” was clearly not one that was shared by everyone gathered in the square, though as Gooch later told Aleteia, “I wasn’t too sure about the speeches, but then perhaps they weren’t really the point.”

If the point was to show how the unity cause isn’t just for stereotypical unionists, the rally was a resounding success. “I’ve never been to an event with @eddieizzard before,” tweeted Tim Montgomerie, creator of the ConservativeHome website, in advance of the rally, “but that’ll change at 6pm tonight.”

Trafalagar Square seemed a fitting place for comedian Izzard, known for his left-wing and pro-European views, to appeal to Scotland to stay in the United Kingdom. Five years ago yesterday he completed the last of 43 successive marathons throughout the UK by running into Trafalgar Square.