Would an Independent Scotland be an Anti-Catholic Scotland? 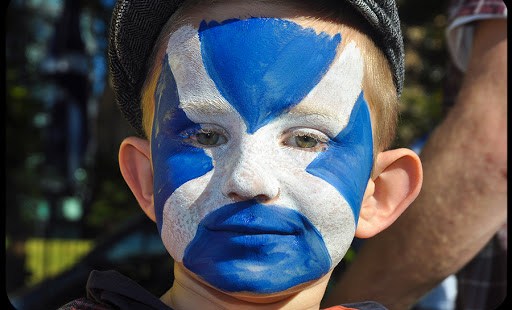 With the vote looming, doubts remain.

Just days after thousands of Protestant Orangemen paraded through the streets of Edinburgh, and with the prominent Scottish Catholic philosopher John Haldane having expressed concerns about the fate of the Church in an independent Scotland, a hundred of his fellow Scottish Catholics have paid for an advertisement to proclaim that “a ‘Yes’ vote in this week’s referendum makes possible a more socially just Scotland.”

“As part of the UK, we live in the world’s fourth most unequal state,” said MacLaren, adding, “Independence will allow us to follow Pope Francis’s words and say ‘no’ to ‘an economy of exclusion and inequality,’ not just for our own citizens but through a foreign policy based on solidarity with the poorest, for those who suffer from hunger and exploitation throughout the world.”

Citing Evangelii Gaudium, MacLaren seemed to draw a different lesson than did rocker Bob Geldof from the principle that “’no’ is not always a negative.” For MacLaren, Scotland could better serve the common good at home and abroad as an independent country than as a constituent part of the UK.  In this, Scotland would be in line with other northern European countries such as Norway, which spends almost a third as much on international aid as the UK does, despite having only five million people. (This compared to the UK’s 64 million; or Ireland, which last month had 336 troops on UN peacekeeping missions compared to 282 from the UK.)

Another signatory, Harry Schnitker, senior research fellow at Dundee’s St. Ninian’s Institute, argues there is little hope of Westminster politicians voting in line with the principles of Catholic Scots.

There is a common perception in Scotland that welfare reform in England and Wales has constituted an onslaught on the poorest and weakest. The irony of this is that work and pensions secretary Iain Duncan Smith famously committed himself to helping Britain’s most vulnerable in 2002, following a visit to Glasgow’s Easterhouse estate.  The first senior Conservative politician ever to speak at the Labour Party conference, in 2005, he insisted at a Christian Socialist movement debate that “everybody should have enough money to live properly in their community,” and that “at some point we’ve got to redistribute assets, not just income.”

Alas, despite taking office in 2010 with the aim of eradicating poverty through a universal credit system, he saw matters worsen across Britain. This June, the Scottish Parliament’s Welfare Reform Committee accused the Department for Work and Pensions of ignoring a 400 percent increase in food bank use between 2012-2013 and 2013-2014, saying that “There’s no doubt that the increase can be connected directly to benefit sanctions and other issues.”