Ayaan Hirsi Ali Brings Her “Clash of Civilizations” to Yale 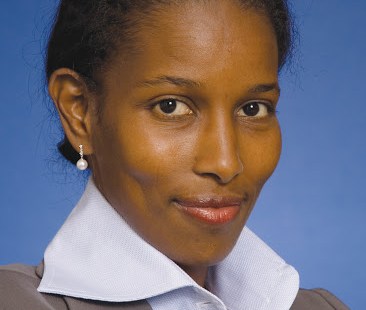 More important than bombing ISIS is going after the “core text” of Islam, Somali-born activist says.

The controversial Ayaan Hirsi Ali says that the civilized world needs to identify the "core" of Islam before hoping to defeat threats like the Islamic State.

Delivering a lecture at Yale University Monday entitled, "Clash of Civilizations: Islam and the West," Hirsi Ali said there is a serious problem with Islam itself, not merely the radical interpretation of it that leads to the kind of violence the world is seeing in Iraq, Syria and parts of her native Africa.

Leaders around the world, including President Obama, have recently made statements about the Islamic State  not being truly Islamic. US Secretary of State John Kerry said Monday that to counter the Islamic State, part of the strategy is to try to defuse the ideology behind the conflagration.

Speaking with reporters in Paris after meetings with world leaders, Kerry said that part of the coalition’s work is to “start major efforts to delegitimize ISIS’s claim to some religious foundation for what it’s doing and begin to put real Islam out there.”

It’s questionable whether Hirsi Ali’s version of the "real Islam" would find a place in Kerry’s worldview or not. Indeed, many have impugned her judgment and disputed her authority to pronounce on the matter.

So much so that Brandeis University decided to disinvite her from its commencement this past April and reneged on its decision to grant her an honorary degree.

The William F. Buckley Jr. Program at Yale was determined not to let something like that happen again.

Still, when the program announced that Hirsi Ali would be coming to kick off its 2014-15 speaker series, a coalition of student groups, led by the Muslim Students Association at Yale, protested. In a letter co-signed by 35 other campus groups and student organizations, the Muslim Students accused Hirsi Ali of “hate speech” and expressed concern that she “is being invited to speak as an authority on Islam despite the fact that she does not hold the credentials to do so.”

But judging by the applause of the 300 or so members of the audience, the Somali native and former Muslim swayed enough people to her basic thesis.

Aleteia reached out to members of the Muslim Students Association, but did not hear back.

In an email the day after Hirsi Ali’s lecture, Lamin Sanneh of Yale Divinity School wrote, “I stood in line yesterday evening but failed to get in. I was intending to challenge Ms. Ali on her extremist views of Islam.”

Reportedly, the line of people turned away when the hall reached capacity stretched down a long New Haven block.

Pressed further on his remark, Sanneh, the D. Willis James Professor of Missions & World Christianity and a member of Aleteia’s Board of Experts, offered this statement:

Ms. Ali has described her experience as a young Muslim girl growing up in Somalia, and no one who hears her story can fail to be moved and appalled by it. I yield to none in my admiration for her indomitable will and in my respect for her as a person. Indeed, most decent-minded Muslims and others would empathize with her without following her in her blanket condemnation of the religion.

But I remain puzzled by her general view that what happened to her is what Islam represents for Muslims as Muslims, and that contesting her charge of a repressive and nefarious Islam is proof that the religion is a religion of intolerance. If her judgment is based on that kind of reasoning, it is hard to think of any cultural tradition that could pass muster. As a Catholic, I would have to be the first to surrender any claim to innocence on that score. There has to be another way to be critical that includes the duty to be self-critical.


Sanneh is the author of, among others, "Faith and Power: Christianity and Islam in ‘Secular’ Britain," and "Piety and Power: Muslims and Christians in West Africa." He was appointed by Pope Benedict XVI to the Pontifical Commission on Religious Relations with Muslims. A native of West Africa, he grew up a Muslim.