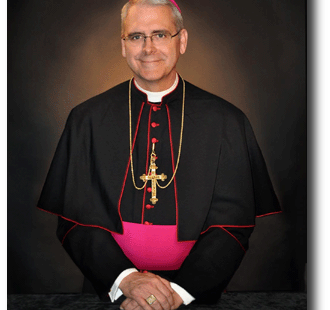 The archbishop of Oklahoma City is continuing to ask the faithful for prayers as the day draws closer when, in his words, a publicly-performed satanic ritual will invoke “powers of evil and invite them into our community.”

In a final appeal before Sunday’s performance of the “Black Mass” at the Oklahoma City Civic Center, Archbishop Paul S. Coakley urged Catholics to “demonstrate our faith in the power of the Lord’s grace by praying for the conversion of those who are perpetrating this sacrilege and are bound by the Evil One.”

He also warned anyone who may be attending the ritual that they are putting their souls in danger.

For months, the archbishop and others have been appealing to city officials for cancellation of the performance, scheduled for Sunday evening at 7 in an 88-seat theater within the Civic Center. Officials have declined to cancel the reportedly sold-out performance, saying that as a public facility, the Civic Center is required to rent to organizations and individuals as long as they abide by the law and the center’s policies and procedures.

Jennifer Lindsey-McClintock, a spokeswoman for the Oklahoma City Parks & Recreation Department and the Civic Center Music Hall, told Aleteia today that they are anticipating protests on Sunday and that there will be a police presence to ensure the safety of groups who will be there to protest.

“As a professional event facility, our staff is trained to handle multiple scenarios, including those of a controversial nature,” she said. “From a basic event standpoint, we are treating this much like most other events that come through our hall, with the inclusion of additional security being provided by the Oklahoma City Police Department.”

She said that only individuals who hold a ticket to the event will be allowed inside the building and that members of the Oklahoma City Police Department will be inside the theater to monitor the event for any illegal activity.

In order to comply with local laws, the group had to make a few changes to the ritual they intend to perform. Instead using a naked woman as an altar, she’ll be wearing lingerie, and vinegar will substitute for urine.

“Event staff will check [the vinegar] prior to the event taking place,” McClintock said.

Nearly 103,000 people have signed an online petition to halt the black mass. Negotiations the archbishop conducted with city officials did not sway them, and the archdiocese, through a law firm, also had to contend with the satanic sect that is performing the black mass, the Dakhma of Angra Mainyu, which claimed to be in possession of a consecrated Host it promised to desecrate during the ritual. Facing a lawsuit, the sect handed over the Host, which it claimed to have obtained from a priest in a foreign country who is a member of the Dakhma.

The leader of the Dakhma, Adam Daniels, is a registered sex offender, convicted in 2009 of "sexual battery of persons over the age of 16," according to the state’s sex offender registry, which notes that he has satanic tattoos "all over body."

Archbishop Coakley, along with Bishop Edward Slattery in nearby Tulsa, Okla., have urged Catholics to fight the project with prayer and fasting. Both outlined a novena of prayer that the faithful could take part in, individually and in their parishes, leading up to the feast of the Assumption last month.