Bishop for Only 12 Months, Cirilo Flores is Laid to Rest 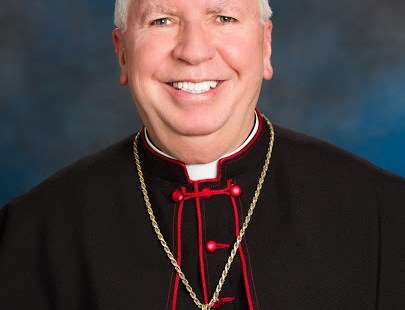 After a Contemplative Retreat, the Corporate Attorney Gave up Law and Entered Seminary

He was the bishop of San Diego for only 12 months, but Cirilo Flores received a large spiritual sendoff Friday. More than 1,000 attended his funeral Mass, according to UT San Diego:


The tone was set at noon, when Flores’ funeral Mass began with a 10-minute procession of clergy. Into the sanctuary marched white-robed princes of the Church — cardinals from San Francisco and Los Angeles, four archbishops and 20 bishops. They were preceded by roughly 300 priests from California and Mexico, some parish priests, others attached to various orders, and even retirees like the blind Msgr. Raymond Kirk, accompanied by his guide dog, Buster.

About 1,000 people filled the church, Carmel Valley’s St. Thérèse of Carmel; hundreds more retreated to the parish hall to watch the service on streaming video.

Bishop Flores died of cancer on Sept. 6. He was 66. He had an unusual background for a priest, ​UT San Diego, formerly known as the San Diego Union Tribune, noted. He was a corporate attorney. Layman Joseph Esparaza played a role in Flores’ decision to become a priest:

In the mid-1980s, the attorney Cirilo Flores attended a spiritual retreat that Esparza helped organize. At the end of this contemplative weekend, Flores announced his decision to leave the law and enter the seminary. Two decades later he became the pastor of Esparza’s church, St. Norbert’s in Orange.

Esparza was a veteran deacon who assisted the clergy. But he had recently been diagnosed with multiple sclerosis, a disease that was robbing him of his physical powers.

In addition, Bishop Flores was an advocate for loosening immigration laws. He attended a press conference near the Mexican border to pray the United States to show more compassion toward Hispanic immigrants, legal and otherwise, according to the Catholic News Service.

Finally, he was a holy man, according to the National Catholic Register. Bishop Flores was a “man of the Beatitudes,” according to Archbishop Jose Gomez of Los Angeles, who spoke at his funeral:

“We thank God today for the life of our brother and friend, Bishop Cirilo. What a beautiful example he was for all of us,” Archbishop Gomez said in his homily at Saint Therese of Carmel Church in San Diego.

“He showed us how to be a priest, how to be a bishop — and how to be a Christian,” the archbishop continued. “He tried to live with humility, simplicity and purity of heart. He tried to be a merciful man with a heart for the poor and vulnerable.”