The Struggle Against the Black Mass, From Oklahoma Archbishop’s Perspective 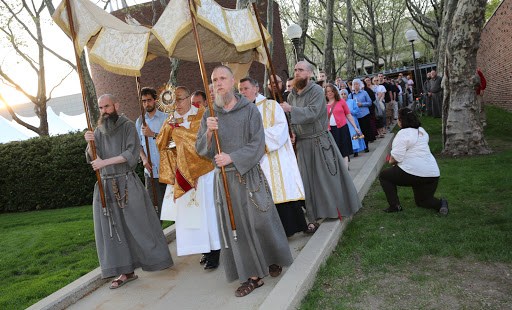 Ever since he first learned of a local satanic group’s plans to use a public theater to perform a "black mass," Archbishop Paul S. Coakley of Oklahoma City has been urging public officials to cancel the event and asking Catholics to pray for that intention.

He has been unsuccessful, and this Sunday, the Dakhma of Angra Mainyu will take to the stage in an 88-seat theater within the Oklahoma City Civic Center Music Hall to reenact a ritual that is an inversion of the Catholic Mass. Though they were forced to hand over what they claimed was a consecrated Host, which they planned to desecrate during the ritual, the sect still plans to

perform their own version of a "consecration" over a substitute "host," as well as a "Satanic Exorcism."

Outside, groups opposed to the use of public space for this event will be praying and protesting. Archbishop Coakley will be leading a prayer vigil several hours earlier at an Oklahoma City church.

Aleteia spoke with Archbishop Coakley Friday about his attempts to keep the black mass out of Oklahoma City and to strengthen his flock through prayer.

This year, we’ve seen attempts to perform the black mass for the public in two places—at Harvard University and in Oklahoma City. We see a group called the Satanic Temple attempting to install a statue at the Oklahoma State capitol and the same organization announcing that it will open 15

chapters nationwide. In your view, is there a rise in Satanic activity? If so, what accounts for it?

There certainly seems to be a new boldness among satanic groups in that they’re coming out of the shadows, which is where they’ve been very comfortable dwelling up until now, and displaying a much more public face. I’d never heard of a public black mass before the event that was scheduled at Harvard, only to be followed by the one here in Oklahoma City.

So there certaily seems to be an increase in public satanic activity; whether that indicates that there is more satanic activity, I don’t know. it could well be with the rise of secularism and the growing fashionable nature of atheism these days. It kind of leaves the door open to this kind of interest or curiosity and influence.

Going back to this summer, as this story was developing, can you tell me about your negotiations with city officials when you were trying to convince them to cancel this event? What was each side’s basic position, and why did they not seem to get it that this sort of thing is deeply offensive to Catholics?

In my conversation with our city officials, they indicated that they found the event deeply offensive as well. Though none of them around the table were Catholic, they found that this was offensive to all Christians.

But as their justification for doing nothing to stop it, they indicated that they were bound by the Constitution, bound by their own by-laws, the fact that the city had to remain neutral about the kinds of programming that would take place in a public facility.

For one thing, I think there are other regulations restricting what can be placed on the steps of the state capitol. There are all kinds of codes, and I think anybody who wants to can’t come along and place the monument of their choice there. I think they permitted the Ten Commandments to be placed there because the capitol is the place where lawmakers make laws, and the Ten Commandments are a set of laws, so it had a certain fittingness, whereas there’s nothing fitting or appropriate between a statue of Satan and what takes place within the capitol.