Was Pope Francis “Pushing the Envelope” by Presiding over the Marriages of Cohabiting Couples? 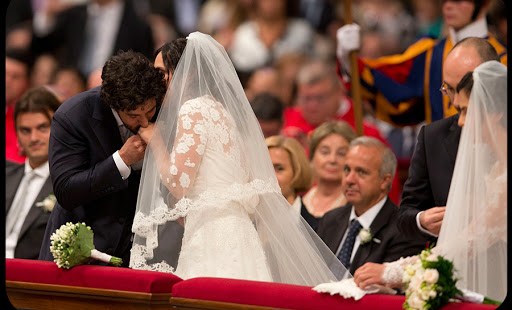 The pros and cons of offering sacramental marriage to cohabiters living in an uncatechized culture.

The New York Times ran a piece last weekend entitled “Beyond Marriage.” It tells a story about high rates of cohabitation, high rates of non-marital births and marriage vanishing as a social norm. The same day, Pope Francis presided over the marriage of twenty couples, some of whom were cohabiting and at least one where the bride has a child out of wedlock. No one in the media seemed surprised or outraged by the facts reported in "Beyond Marriage," but Pope Francis’ actions stirred up a media frenzy. Is he relaxing the rules? Pushing the envelope in advance of October’s Extraordinary Synod on the Family?

We can set aside the question of whether a couple may be admitted to sacramental marriage if they are cohabiting. The answer is plainly yes, since no law impedes such a marriage (Code of Canon Law, cc. 1073–1094).

The interesting question is really whether they should be married if cohabiting. And this is a pastoral matter with fairly compelling reasons on each side.

Consider first the case against admitting cohabiting couples to marriage. This case rests on the idea that cohabiting couples, by definition, do not understand the nature of marriage. In the extreme, this argument might even be taken to augur against validity itself.

A Catholic philosopher and friend of mine put it thus: “I wonder if a canon law argument couldn’t be mounted, or more precisely an argument against validity, in this way:

"1.
You cannot be validly married if you do not recognize the commitment to be unqualified.
2. You cannot recognize the commitment to be unqualified, if you do not think sexual relations are under the law of  God.
3. If you are cohabiting, you cannot view sexual relations as under the law of God.
4. It is difficult to believe that a single act (e.g., a marriage vow) changes the intention and beliefs of someone who has lived in a certain way for a long time.”

In other words, by their very history, cohabiters undermine the requirements needed to contract a valid marriage. Such marriages might even be ipso facto annullable.

So what is the possible case in favor of admitting cohabiting couples to marriage? The argument here rests on three ideas:

1. Marriage is a natural institution toward which people in every culture incline in some way (by forming of domestic unions, for example).

2. Because they incline to it naturally, preventing them from regularizing domestic arrangements would place unreasonable burdens on people.

3. The marriage of those who wish to make a proper marriage vow—however they arrived at such a wish—can be understood as a step on the path to full conversion, and not as the reward for conversion already attained.

Media coverage of the Vatican ceremony quoted one of the grooms as saying, “When we discovered that it was happening, that it wasn’t a dream—well, it transformed us.”

“I believe with all my heart that any path other than the one our priest set us on would have ended disastrously for our family. ‘Scorched earth’ is a pretty apt term for what would have been left of the three of us if [my husband] and I had been pressured and brow-beaten into attempting to correct our lives at once. […] even being on the slowest path possible out of mortal sin was almost too much for us. […] Looking back, I see two people trying to wrench themselves out of sin without much hope of success, but with the unshakeable confidence of a gentle and loving priest to guide our steps.”

So, which pastoral course is best? Suppose that we are faced with a Christian culture in which people know—they feel and have understood—what marriage is, then the right course may indeed involve calling couples to reform, to pray and to study before considering marriage. And I believe there are some communities today, such as the one in which I was raised, where this description still rings true. As a young child I was blessed to know a great many families living God’s call to marriage and family life faithfully and fruitfully.