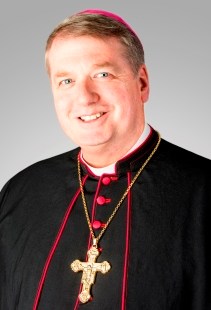 Archbishop-Designate Anthony Fisher reaches out to youth, victims and minorities

Bishop Anthony Fisher of Parramatta, Australia, in his first press conference as archbishop-designate of Sydney reached out to victims of clerical abuse.

The Vatican announced on Thursday his appointment as the ninth Archbishop of the Australian metropolis, where he had previously served as an auxiliary bishop.

Addressing abuse survivors and Sydney’s young population, Archbishop-designate Fisher described as “harrowing” the stories he had heard from abuse survivors, saying: “No excuses, no cover-ups. I am ashamed and I’m sorry for where we’ve failed you in the past.


The Church can do better, and I’m determined to play my part as a leader in Sydney.”

His words were in contrast to
comments he made during World Youth Day in 2008 in Sydney, for which he was one of the main organizers.
During a press briefing during that celebration, he responded to questions about two Melbourne women who were repeatedly raped by a priest when they were students at a Catholic school from 1988 to 1993.


The case was detailed on local television, but Bishop Fisher told the World Youth Day daily media briefing that he had not seen the program.

"Happily, I think most of Australia was enjoying, delighting in, the beauty and goodness of these young people … rather than dwelling crankily, as a few people are doing, on old wounds," he said.

He did, however, say that abuse had no place in the Church. "It’s against all Christian teaching, all morality. We are trying our hardest to prevent this happening again and to bring healing and justice to the victims of these terrible cases."

Archbishop-designate Fisher succeeds Cardinal George Pell, who is now one of Pope Francis’ Council of Cardinals Advisers and head of the Holy See’s new Secretariat for the Economy.


The younger bishop will head an archdiocese of 664,000 Catholics in a population of almost 2.5 million, with 484 priests.

Having lived and worked in many parts of the archdiocese, the archbishop-designate said, he felt “a deep affinity for every part of this wonderful city and a deep concern for its people,” and looked forward to building on the “strong foundations” left by Cardinal Pell in what he described as “a vibrant, growing city with so much potential to be one of the greatest cities — and faith communities — of the world.”

The 54-year-old archbishop-designate was born in southwest Sydney’s Crows Nest, educated at Catholic schools, and studied history and law at the University of Sydney.
He practiced law before entering the Order of Preachers in 1985, and was ordained in 1991, after which he completed a D.Phil in bioethics at Oxford and taught at the Australian Catholic University.

In 2001, the young Dominican founded Melbourne’s John Paul II Institute for Marriage and Family, where he taught moral theology and bioethics, and two years later returned to the Sydney archdiocese as an auxiliary bishop.
As such, he chaired the Catholic Schools Board, served as Episcopal Vicar for Life and Health.
In 2010 Pope Benedict XVI appointed him bishop of Parramatta, a large diocese covering Sydney’s western suburbs.


A member of the Pontifical Academy for Life, he chairs the New South Wales’ Catholic Education Commission, and as Bishop of Paramatta has written pastoral letters on topics as diverse as confession, child abuse, and the Eucharist, and sought to promote vocations and evangelization while supporting families and young people from ethnic minorities.

His support for ethnic minorities will clearly remain a priority for him in his new role, in which capacity he has already asked to meet with Muslim leaders to hear their feelings about current tensions, and find out how they can work together to move forward as “a more peaceful, more harmonious community.”

Pointing out that his forebears came from Australia, Europe, Africa and Asia, he described the Catholic Church as world’s most multinational Church, in which “every nation on earth is represented.”

Explaining how the Church can “demonstrate to the world that people of many different backgrounds, histories, ethnic groups, nationalities can live as friends, as colleagues and neighbors,” he said that the Church had an important role to play in helping Sydney “give the world a good example” of “coexistence and peace and friendship.”

Describing his task as “a big role for anybody” Archbishop-designate Fisher said that he needed “God’s help and the help of the Christian community.” He asked that all Catholics and others of good will pray for him that he might be “a good shepherd after the heart of Jesus Christ.”

Greg Daly
covers the U.K. and Ireland for Aleteia.