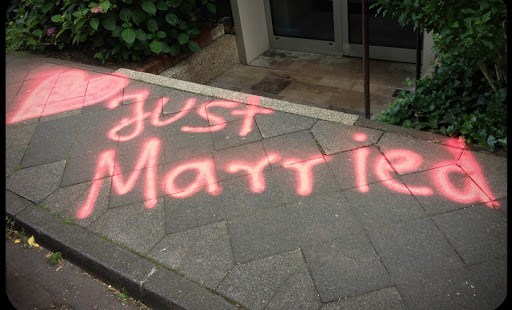 Before there is no more debate…

To offer advice about the same-sex marriage debate may already be an unduly optimistic assessment of the circumstances. Is there really still a marriage “debate”?

It seems more likely that same-sex marriage is a fait accompli that is no longer up for discussion. Those who oppose same sex marriage, we are told, are bigots living in the past.

But then again, it is worth wondering: Has the culture really done a 180 degree change in a matter of a few years, the way it seems to have? Or have same-sex marriage proponents  gone too far too fast? Will there be a retraction of the initial eagerness to redefine marriage?

Time will tell, but hoping for the best, I think Catholics need to discuss same-sex marriage a little more from the heart, while not shutting down the head. Let me explain.

Catholics don’t hate persons with same-sex attraction. But we sure might have seemed like we do at times (as these folks experienced).

In some cases, our behavior towards each of these groups has been atrocious: Just ask Mother Angelica as to being a child of divorce. In many other cases, we have lived up to our highest virtue: charity.

Let’s say, “I’m sorry we came across as haters. We accept you with respect, compassion and sensitivity — just like the Church tells us to, like Mother Teresa and Pope Francis have shown we do. We want to love unconditionally, with a love that doesn’t run through a filter of moral judgment first. Forgive us for the times we haven’t.”

“Marriage is something sanctified between a man and a woman,” Obama said in 2004.

“Marriage is as a marriage has always been, between a man and a woman,” said Hillary Clinton in 2000.

Marriage is what it has always been; what it always shall be. Time can’t change truth.

3. Don’t make it a Catholic thing.

Every major religion has defined marriage the way Obama and Hillary did, and every society, too.

Gandhi, Pope John Paul II, Martin Luther King Jr., the Dalai Lama, the Rabbinical Council of America — all defined marriage as one man and one woman. And none are bigots. Neither are we.

4. Focus on the struggling young couple.

Think of the parents in low-income areas in your community. Think of the friends you know who struggled as they just started out. Heck, think of the old pictures of your mom and dad holding you.

They are newly married. They are trying to make ends meet. Kids come along, because that is what happens when a man and woman live together.

The main reason the state recognizes marriage at all is for the young couple with children. They need special help, a special status — not because their romance is “more special” than others. They need the help because children come to their relationship naturally, ready or not. The strain is hard on young marriages — and, in turn, broken marriage is a leading indicator of poverty.

Is the romance between same-sex couples real? Definitely.