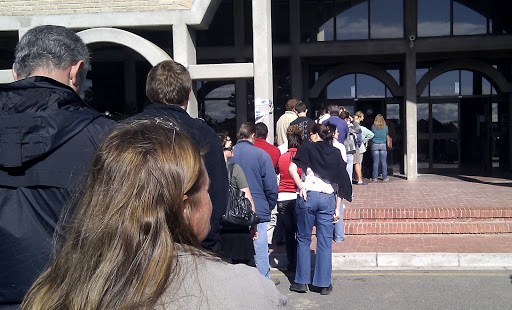 WASHINGTON – American Catholics have moved sharply toward the Republican Party since President Obama took office in 2009, according to a new poll from the Pew Research Center.

White Catholics have broken the furthest toward the Grand Old Party. By a 53-to-39 margin, Caucasian Catholic registered voters said they identify with or lean toward the Republicans. They were split evenly between the Republican and Democratic parties five years ago, and identified with the Democrats by a 57-to-40 margin as recently as 1992.

Hispanic Catholics, too, have moved to the GOP.  Five years ago, Democrats retained a 79-to-19 advantage with this group of registered voters. Now Democrats’ lead has shrunk to a 67-to-26 advantage.

Despite Catholics’ migration toward the GOP, Democrats retain a slim lead with Catholic registered voters heading into the upcoming congressional election.  On the question of which party they will vote for in the 2014 election, 48 percent of Catholics said they would vote for a Democrat in their district and 44 percent said a Republican. Obama won Catholic voters 50 to 48 in 2012, according to a Pew poll.

Released Monday, the poll from Pew Research Center tracked Americans’ attitudes to religion and secularism. The survey found 72 percent said religion is losing influence in American life, a five-point jump from 2010. In addition, 49 percent told pollsters that churches and houses of worship should speak out about social and political questions.

Although registered Catholic voters have broken toward the Republicans, they are not enamored with the party platform’s opposition to gay marriage.

Half of white Catholics said they favor allowing “gays and lesbians to marry legally.” Only 38 percent opposed it. Both figures indicate that white Catholics’ attitude to gay marriage is more liberal than other Americans.  Forty-nine percent of Americans said they support gay marriage, while 41 percent said they oppose it. (The figures represented a slight drop in support for same-sex nuptials, however).

In addition, Catholics expressed liberal attitudes on the question of whether businesses should provide services, such as catering and flowers, to same-sex married couples. Fifty-seven percent said No while 40 percent said Yes. By contrast, Americans were split 47 to 49.

The Pew poll did not ask Americans to explain their political allegiances. But the survey hints at the reasons for Catholics’ discontent with the Obama administration.

The poll of 2,002 Americans was taken September 2-9 via telephone, according to a summary of its methodology. Nearly 700 respondents had no landline telephone and used a cellphone instead. More than 800 were interviewed on a landline phone and 1,201 on a cellphone.