On Eve of the Synod on the Family, New Book by Cardinals Revives Debate over Divorce and Remarriage 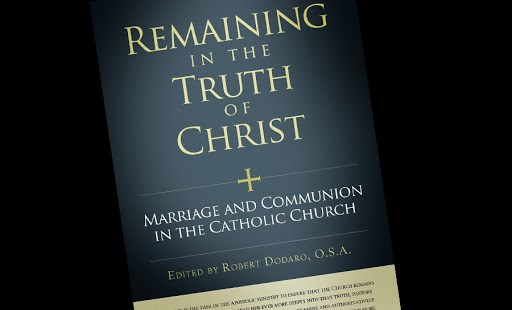 An “Answer to Cardinal Kasper’s invitation for further discussion”

On 1st October, just days ahead of the Extraordinary Synod on the Family to be held at the Vatican, US based Ignatius Press will publish a monumental book addressing the issue of reception of the Eucharist and those who are divorced and remarried.

The book, entitled “
Remaining in the Truth of Christ” is a response by five leading cardinals and four other scholars to the controversial intervention made by German Cardinal Walter Kasper during the Extraordinary Consistory of Cardinals in February 2014. The intervention, which was swiftly leaked to the Italian newspaper Il Foglio, calls for a “paradigm change” and “more pastoral and spiritual procedures” to allow divorced and remarried Catholics to receive the Eucharist after a period of reorientation. Kasper cites the sacrament of confession, practices found in the early Church, and appeals to the Orthodox Church’s concept of
Oikonomia to support his case. The vast majority of the Cardinals who spoke at the consistory were in opposition to Kasper’s proposal.

Soon after Kasper’s intervention, his book, “The Gospel of the Family,” was published, carrying the text of his speech. Kasper’s book hoped to provide “a theological basis for the subsequent discussion among the cardinals.” As such, writes Rev. Dr. Robert Dodaro, O.S.A., the editor of “Remaining in the Truth of Christ”:


The purpose of the present volume is to answer Cardinal Kasper’s invitation for further discussion. The essays published in this volume rebut his specific proposal for a Catholic form of O
ikonomia in certain cases of divorced, civilly remarried persons on the grounds that it cannot be reconciled with the Catholic doctrine on the indissolubility of marriage, and that it thus reinforces misleading understandings of both fidelity and mercy. The studies included in this book thus lead to the conclusion that the Church’s long-standing fidelity to the truth of marriage constitutes the irrevocable foundation of her merciful, loving response to the individual who is divorced and civilly remarried. This book therefore challenges the premise that traditional Catholic doctrine and contemporary pastoral practice are in contradiction.

Commentators are remarking that Kasper’s arguments are thoroughly demolished in this book, and it should prove a useful resource for participants of the forthcoming synods. When asked what he hoped the book would achieve, philosopher John Rist, speaking exclusively to Aleteia, answered: “I hope the book will show that the ideas proposed by Kasper and others would represent a radical and ill-considered change in the Church’s teaching on sex and marriage, both directly and indirectly.”

Speaking of his reaction to first hearing Kasper’s proposals, Rist told Aleteia: “I was extremely disappointed with Kasper’s original proposal, both in terms of the contemporary situation, where I saw him bowing to secularism (in the way Anglicans have done on sex and marriage), and in that his treatment of Church history is cavalier (to put it very mildly indeed).  He followed the opinion of a number of discredited scholars whose views happened to coincide with what he wanted to hear.”

From the other side, in a recent paper, Australian theologian Rev. Dr. Paul-Anthony McGavin has urged restraint “in what we say about the juridical treatment of marriage in the Orthodox Churches,” and called for a “conversation between Orthodox and Latin perspectives” on this issue. Similarly, Belgian Bishop of Antwerp, Johan Jozef Bonny, has cited the Orthodox practice of
Oikonomia as a cause for hope, offering a “new impetus.”

Rist responds: “The appeal to Orthodoxy is misguided, since the ‘tolerant’ Orthodox position (with its misreading of the Fathers) largely developed because of pressure from despots wishing to dump their wives (as with our very own Henry VIII).” And Cardinal Brandmuller’s chapter reminds us at what cost the Church defended the unity and indissolubility of sacramental marriage, as witnessed by such martyrs as John the Baptist, Kilian, Kolonat and Totnan, John Fisher, Thomas More, and the English Carthusians under Henry VIII—timely and powerful intercessors at this crucial moment.

Yet the debate has not been limited to the theological and pastoral considerations of a small circle of cardinals and scholars. The secular press has pitched the issue as a battle between conservatives on one hand (usually typified as allies of Pope Benedict XVI) and progressives (or pastoral and merciful) church leaders led by Pope Francis, who is said to want a more inclusive Church. Pope Francis is reported to have offered praise and warm words for the Kasper intervention, but he likewise backed the publication of an essay by Cardinal Muller re-stating and explaining the authentic teaching of the Church on the issue.

Concerned Catholics would be forgiven for recalling the words of Pope Benedict XVI in his last talk to the clergy of Rome in February 2013, speaking about Vatican II:


It was a political hermeneutic. For the media, the Council was a political struggle, a power struggle between different currents in the Church. It was obvious that the media were taking sides with that part which seemed to them to have the most in common with their world.

All eyes are now set on the two forthcoming synods. This book has drawn a clear line in the sand, with both sides gearing up for a showdown. “Remaining in the Truth of Christ” is a must read at this crucial moment for laity and clergy alike, and a welcome reminder not to let ourselves be swept along by media version of the synod’s meaning.


Daniel Blackman
is a writer living in London, England.