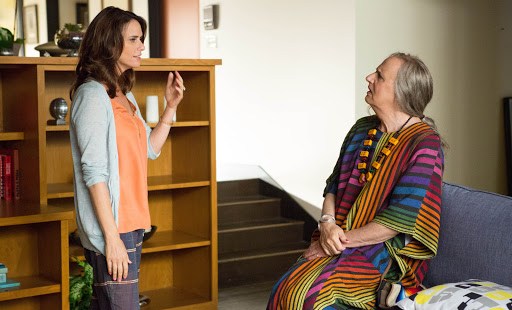 Creator Jill Soloway wants “trans-ness” as “part of the wallpaper”

BEVERLY HILLS, Calif. (AP) — Jeffrey Tambor is spiffed-out in jeans and a blue blazer and, as a further gesture, a shade of fingernail polish.

What shade is it? "Mauuuve," he says with deadpan flourish.

Tambor, an up-for-anything actor, has logged memorable TV roles as a comically corrupt industrialist on "Arrested Development" and before that, a hapless talk-show sidekick on "The Larry Sanders Show" during his lengthy career.

Now, at age 70, he’s involved down to his fingertips in what he calls "the role of a lifetime." Best-known for comedy, Tambor turns in a full-range performance as Mort Pfefferman, who, much to the shock of his grown children, comes out as a woman christened Maura.

While the pilot episode of this dramedy, "Transparent," has been on Amazon’s Instant Video website for months, the additional nine half-hours of its first season premiere on Friday.

But Maura doesn’t exist in a vacuum. Her journey as an emerging transgender is intertwined with the stories of her family — an ex-wife (played by Judith Light) and a trio of progeny (Gaby Hoffmann, Amy Landecker, Jay Duplass), each of whom is plagued by agita and so self-absorbed they could dismiss dear old dad as someone set in his ways and long past able to surprise them.

Any family is just one revelation away from upheaval: That’s a message of "Transparent," states Tambor, "and hopefully, people will look at it and say, ‘Oh, this is just like my family. It’s exactly how WE are around OUR Thanksgiving table!’"

"I wanted to do a show about a family with ‘trans-ness’ as an element — not as the comedy or dramatic question, but as part of the wallpaper," says creator and executive producer Jill Soloway. "What we’re doing is privileging The Other. The people who would normally be ‘Other-ized’ in another show — the transdad, the gay daughter, the love-addict son — in ‘Transparent’ are the subjects, instead of the objects."

Soloway previously explored a dicey subject — death — as a writer-producer on HBO’s funeral-home drama "Six Feet Under," and she told the story of a frustrated stay-at-home mother who adopts a stripper as a live-in nanny, and more, in her 2013 film, "Afternoon Delight," for which she won the Sundance Best Director award.

Now, as she confronts the full spectrum of sexual identity, Soloway notes that the first thing people ask about the show is, How far will Maura go? Will he go under the knife to physically transition into she?

The answer: To Be Determined, in part by the level of viewer support that will determine the duration of the series’ run.

"When we think about the story over the course of five years, these are real questions," she says. "But what the show’s gonna help you understand is that people can become the gender they feel most comfortable in, with or without hormones, with or without surgery, and with or without necessarily identifying with the binary male or female."