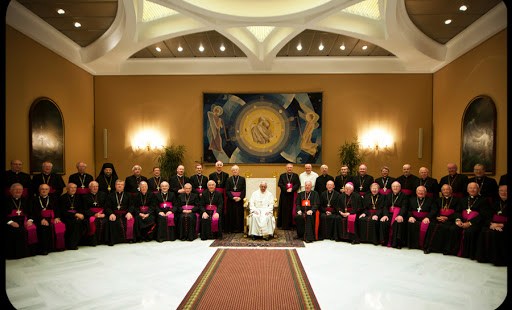 It is a daunting task to be selected as an auditor for the III Extraordinary General Assembly. Since the appointment letter came in late July, life has taken on a heightened awareness of the clash on marriage and family life issues that exists between the Catholic Church and the culture. These issues are clearly defined in the Instrumentum Laboris, the working document for the Synod. It provides a framework from which participants will study the pastoral challenges of the family in the context of the new evangelization.

Among other things, the Instrumentum provides a snapshot of the present-day state of marriage and the family across the globe. It is a compilation of “extensive material submitted to the Secretariat of the Synod” from every diocese on the planet. It is not a stale document that someone pulled off of a shelf. Rather, it is the voice of God’s faithful living on earth at this moment.

The Instrumentum is filled with the responses of people just like you and me. Its text flows out as a story; one that tells us about our current human existence. This story is filled with sorrow. It reveals an impoverished understanding of God’s plan for authentic love and, as a result, widespread human agony. The story exposes critical internal issues for the family, ranging from a weak or non-existent faith to struggles in becoming a "domestic church" as the family is meant to be. It also identifies external issues that span the reality of migration, poverty, individualism and working conditions that do not favor family stability. And, it points out a multitude of “isms” — credentialism, individualism, relativism, consumerism, virtualism — that are disrupting family cohesiveness.

The document is largely joyless. It focuses on matters that we have let slide over the past 60 years. Many in the Church have fallen silent on important topics of love, sexuality, and marriage. In our collective reticence, many Christians have grown up without any awareness that Catholic Church teachings on marriage and family even exist. Without any guidance or formation, they have decided for themselves how to proceed. They have chosen cohabitation over marriage, sentimentality over selfless charity and independence over interdependence.These behaviors should not be surprising because they are the likely outcome when humans try to relegate “life, faith and ethics to a private sphere …” (no. 74).

It would be disingenuous not to recognize the signs of hope that are weaved into the document. Responses showed that “The life of the Church in these times is characterized by a widespread rediscovery of the Word of God …” (no. 8).  Some dioceses have put considerable time and effort into developing successful programs and resources that support Catholic Church teaching. Another glimpse of hope comes in knowing that

“The responses highlight the importance of love in the family, referring to it as ‘an efficacious sign of the existence of God’s Love’ and calling the family itself ‘the sanctuary of life and love’” (no. 37).

It is comforting to know that those who’ve responded to the prepartory survey still see a connection between love and family life and the need to knit these back together as one.

It was also hopeful to see an emphasis placed on the pastoral challenges concerning openness to life. The Church’s teaching on life and sexuality is highly divisive, in fact one of the most difficult issues we face as a Church. Yet, this document sets the Synod on a course to address the points of contention and work on methodologies that will help the Church proclaim its beautiful teachings on life in light of a faith which “helps us grasp in all its depth and richness the begetting of children, as a sign of the love of the Creator who entrusts us with the mystery of a new person” (