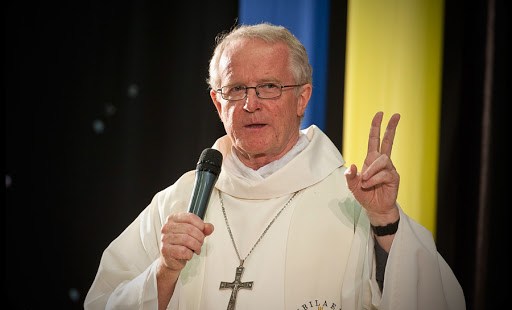 The news that a prominent English bishop is to resign stunned British Catholics over the weekend. Bishop Kieran Conry of Arundel and Brighton, confessed in a statement read throughout the diocese that for some years he had been unfaithful to his promises as a priest and so was offering his resignation.

“I am sorry to confess that, going back some years, I have been unfaithful to my promises as a Catholic priest,” the 63-year-old bishop said, “I would like to reassure you that my actions were not illegal and did not involve minors.”

“As a result, however, I have decided to offer my resignation as bishop with immediate effect and will now take some time to consider my future,” the statement continued. “I want to apologize first of all to the individuals hurt by my actions and then to all of those inside and outside the diocese who will be shocked, hurt and saddened to hear this. I am sorry for the shame that I have brought on the diocese and the Church and I ask for your prayers and forgiveness.”

Bishop Conry’s announcement came ahead of an exposé in the Daily Mail that claimed that he had been having an affair with a married woman.  Denying the alleged relationship, Bishop Conry said that his resignation related “to a relationship of six years ago.”

Responding to the news, Cardinal Vincent Nichols, president of the Bishops’ Conference of England and Wales, said, “This is a sad and painful moment. It makes clear that we are always a Church of sinners called to repentance and conversion and in need of God’s mercy. All involved in this situation are much in my prayers today.”

Educated in the English midlands, Bishop Conry trained as a priest in Rome and was ordained in 1975. In 1980 he was appointed private secretary to the Apostolic Delegate, Archbishop Bruno Heim, and served under Archbishop Heim’s successor before returning to the Archdiocese of Birmingham as a parish priest in 1988. Two years later he was appointed administrator of St. Chad’s Cathedral, and in 1992 he became vice chairman of the National Conference for Priests.

Director of the Catholic Media Office from 1994 until 2001, he briefly returned to the Archdiocese of Birmingham as a parish priest before May 2001 when he succeeded Cardinal Cormac Murphy-O’Connor, then Archbishop of Westminster, as Bishop of Arundel and Brighton.

One of the more visible — and controversial — members of the English hierarchy, Bishop Conry, while head of the bishops of England and Wales’s department for evangelization and catechesis, famously questioned why Pope Benedict XVI had established the Pontifical Council for the New Evangelization.

“You wonder why you’d set up this office for evangelization anyway, because the whole mission of the Church is evangelization, the proclamation of the Gospel,” he said on BBC Radio 4 in 2010. “I don’t think we’re doing that terribly well,” he added, saying he believed the problem was less secularism than the Church’s failure to present itself properly and communicate its message in language people could understand.

In 2008 he dismissed the then bishop of Lancaster’s claim that adherence to Humanae Vitae was this generation of Catholics’ litmus test of obedience, saying most British Catholic couples had never even heard of the 1968 encyclical. Interviewed by the Catholic Herald, he said Humane Vitae should not be regarded as a “key teaching” of the Church, but that since it had been written “we’ve seen the disastrous effects of the devaluing of sexual relationships, to say they don’t mean anything, which has had catastrophic effects on society, catastrophic effects on the value of women.”

When Britain’s same-sex marriage debate began in 2011, Bishop Conry insisted the Church had a duty to speak in defense of “the particular, specific institution of marriage and its specific character as the permanent union of a man and a woman who would then bring up their own children,” but cautioned against “inflammatory language,” such as that used by the since-disgraced Cardinal Keith O’Brien, then Archbishop of Edinburgh.  Denying that the Church was “condemning, blaming or stigmatizing” gay people, Bishop Conry said civil partnerships should be supported.