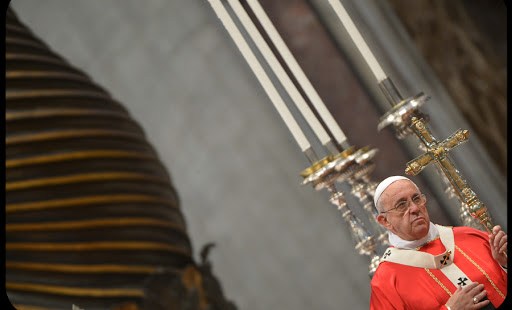 On feast of the Archangels, Pontiff warns that devil presents things “as if they were good”

On Monday’s feast of the archangels Pope Francis spoke of the ongoing battle between the devil and mankind, encouraging attendees to pray to the angels, who have been charged to defend us.

“He presents things as if they were good, but his intention is destruction. And the angels defend us,” the Pontiff told those gathered for his Sept. 29 mass in the Vatican’s Saint Martha residence.

The Bishop of Rome began by pointing to the day’s readings taken from Daniel Chapter 7 in which the prophet has a vision of God the Father on a throne of fire giving Jesus dominion over the world, and Revelation Chapter 12 which recounts the battle in which Satan, as a large dragon, is cast out of heaven by St. Michael.

Noting how these are strong images portraying “the great dragon, the ancient serpent” who “seduces all of inhabited earth,” the Pope also drew attention to Jesus’ words to the prophet Nathanael in the day’s Gospel from John when he tells him “You will see heaven opened and the angels of God ascending and descending upon the Son of man.”

All of these readings, he said, speak of “the struggle between God and the devil” which “takes place after Satan tries to destroy the woman who is about to give birth to a son.”

“Satan always tries to destroy man: the man that Daniel saw there, in glory, and whom Jesus told Nathaniel would come in glory,” the Pontiff observed, explaining that, “From the beginning the Bible speaks to us of this: Satan's (use of) seduction to destroy.”

Envy could be the devil’s motive, he said, pointing to how Psalm 8 says God has made man "a little lower than the angels."

"And that angel of great intelligence could not bear this humiliation, that a lower creature was made superior to him; and he tries to destroy it.”

Pope Francis then noted how “so many projects, except for one's own sins, but many, many projects for mankind's dehumanization, are his work, simply because he hates mankind.”

He continued by explaining that although the bible tells us that the devil is astute and cunning in his attacks, we have the angels to defend us.

“They defend mankind and defend the God-man, the superior man, Jesus Christ who is the perfection of humanity, the most perfect,” he said.

It is therefore the responsibility of the People of God “to safeguard man, the man Jesus,” the Pope went on, because “He is the man who gives life to all men.”

However this is not easy because Satan has invented “humanistic explanations that go against man, against humanity and against God” in order to destroy us.

“This struggle is a daily reality in Christian life, in our hearts, in our lives, in our families, in our people, in our churches,” the Pope went on, adding that “if we do not struggle, we will be defeated.”

“But the Lord gave this task primarily to the angels: to do battle and win,” he said, drawing attention to the final song of Revelation which reads “Now have salvation and power come, and the kingdom of our God and the power of his Anointed. For the accuser of our brothers is cast out, who accuses them before our God day and night.”

Pope Francis concluded his homily by encouraging those present to pray to the Archangels Michael, Gabriel and Raphael, and to recite the prayer to Saint Michael often.

We should do this “so he may continue to do battle and defend the greatest mystery of mankind: that the Word was made Man, died and rose again. This is our treasure. That he may battle on to safeguard it.”