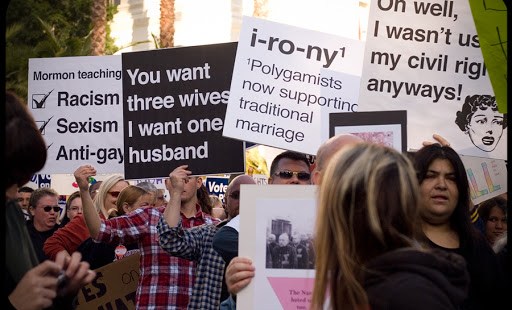 It’s the next logical step in the redefinition of marriage

“Have you not read that the one who made them at the beginning ‘made them male and female,’ and said, ‘For this reason a man shall leave his father and mother and be joined to his wife, and the two shall become one flesh’? So they are no longer two, but one flesh" (Matthew 19:4-6 NRSV).

Our society may be about to take another step in the process of denying these wise words of Jesus on human sexual relations. With widespread divorce, we have long ago moved past the conviction that the two become one flesh. Now our courts are denying that in marriage the two must be a man and a woman. Soon, some argue, they will have to deny that the two must be only two.

If same-sex marriage is okay, then what’s wrong with polygamy? It seems a less fundamental violation of sexual complementarity. No culture has ever permitted homosexual persons to marry, but many cultures have permitted polygamy, including among the Old Testament patriarchs. So why does Jesus — and, following Him, almost all Christian churches — insist on only two marriage partners?

In every society which has sanctioned polygamy, the practice has been for men of wealth and power to collect multiple wives, leaving poorer men unable to have children and families. With polygamy, wealthy men can conspicuously display their wealth by having many attractive and fertile wives, much like wealthy men in our society often now display their wealth by owning a stable of expensive cars or a valuable collection of art. People can create more cars or paintings to compensate for such hoarding, but this is not possible with wives, because, as Jesus noted, God ‘made them male and female.’ Every human generation is born male and female in about equal numbers, so for each wealthy man who takes four, five or more wives, there will necessarily be that many other poorer men who will have no wife at all.

Young men who are unable to have a wife and children — who, in a polygamous culture, can be as many as one in five young men — become a potent source of poverty, disorder and unrest. The responsibility of a wife and family generally stimulates men who marry to greater economic achievement; but not for these men. Crime and emotional distress are much higher for this group, and, without having to consider their children’s future world, political and community participation is much lower. This is one reason that countries with the highest rates of polygamy tend to be poor and politically unstable. West Africa, with the highest rates of polygamy in the world — about a fourth of women share their husband with at least one other woman — also has the world’s highest poverty rates. One study found that savings, investment and income in African countries that do not permit polygamy is over fifty percent higher than in those countries that countenance the practice.

A worse cultural effect of polygamy is its contribution to the demeaning of women. In almost all polygamous societies, but almost no monogamous ones, a woman is sold into marriage by the payment of a bride-price, typically at least a year’s salary, from the suitor to her father. (Recall that in the Old Testament, Jacob worked seven years each for his first two wives.) As women become more valuable as brides, they are controlled more strongly by their family, and are sold at younger ages. The woman’s only choice, if she has one at all, is between expulsion from her family or consent to be one of several wives. As an empirical fact, polygamy only flourishes where women do not enjoy the same civil rights and access to education and employment that are open to men.