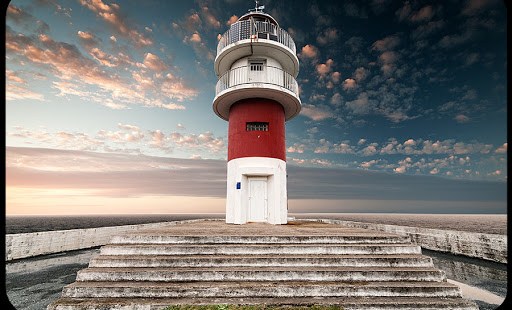 Arrr…the seas they be treacherous herre!

I’m writing this from Hatteras Island, on the Outer Banks. I am literally sitting on a sandbar, which is shifting under me as I type, buffeted by the collision of the warm Gulf Stream and the cold Labrador Stream. A few miles south of here, the infamous Diamond Shoals begin — a volatile stretch of ocean nicknamed “The Graveyard of the Atlantic” due to the number of shipwrecks there (over 2000 in 400 years, according to the good park rangers at Cape Hatteras National Park). As my kids say, in their best pirate accents, “Arrrrr, the seas, they be treacherous herrrre.”

In response to this obvious danger, humans do what they do best: they used their smart brains to come up with ways to warn sailors of the impending danger (but couldn’t use their smart brains to admit that this giant sandbar of an island system is probably best to just steer clear of). There are five lighthouses on the Outer Banks, each with a unique set of visual cues for both day and night. For daytime warning, each lighthouse is painted in a specific color and pattern. These are called “day marks,” and the bold patterns of black and white or red and white help make particularly dangerous sections of ocean easy to spot in the day.

At night, lighthouses use, well, lights. Each lighthouse uses a different flash pattern, on and off signals to not only warn sailors of danger, but also help them locate where they are offshore, based on which lighthouse they’re seeing signals from. It’s like a Morse code specific for lighthouses, which makes sense, since without knowing where you are, being alerted to danger isn’t tremendously helpful if you find yourself worse off by fleeing.

So while the only surefire way to avoid the danger of the Diamond Shoals and the Outer Banks is to stay home, the lighthouses give some degree of warning to those foolhardy souls who have wanderlust in their hearts.

It’s not hard to see God in this. That lighthouses are a tidy metaphor for God’s protection, and the way He does — and doesn’t — manifest it in our lives. While God won’t stop us from venturing out into dangerous waters, neither will He abandon us to run aground and meet a watery fate. Like the lighthouse, God gives us signals, signs we can see from a long way off, to warn us that a current course will end up in disaster. It’s up to us, as ever, though. We can turn a blind eye to the lighthouse. We can stubbornly persist in our path. God isn’t going to keep us home. He’s not going to pick up our boat and place it safely on dry land. There’s that whole pesky free will thing that God takes very, very seriously. So heed the lighthouses or not, but be warned, “Arrrr, the seas they be treacherous herrrrrrre.”