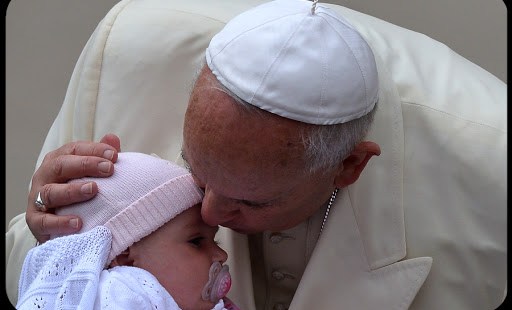 The pope delivers a consistent pro-life message: Human life is beautiful, and Satan is its real enemy.

Pope Francis has been criticized by some Catholics for not being sufficiently pro-life because he has stated that we do not have to be “single issue Catholics,” speaking only about the crime of abortion all of the time.

To make this criticism is to misunderstand Pope Francis’s position. He has not only spoken out in the strongest terms against abortion, saying in April of this year that human life was inviolable and abortion was an “unspeakable crime.” He said to Italian pro-life activists, “It must be therefore [be] reiterated the strongest opposition to any direct attack on life, especially innocent and defenseless life, and the unborn child in the womb is the most concrete example of innocence.”

In saying that Catholics needn’t always speak about abortion, Pope Francis is reminding us that it is a mistake to view the pro-life battle only through the anti-abortion lens. As part of a wider pro-life emphasis and on the threshold of the Synod of the Family, Pope Francis teamed up with Emeritus Pope Benedict last weekend to affirm human life at the other end of the life span.

The two popes celebrated life with tens of thousands of elderly Catholics. At seventy-seven and eighty-seven, respectively, popes Francis and Benedict stand as monumental representatives of how God can use people in the last stages of their lives.

The elderly have much wisdom and experience to impart. They have much to give, but like the very young they are vulnerable. Just as our society has chosen to abort the unborn because they are considered an expensive burden, so the culture of death is advancing remorselessly in an attack on the elderly.

“Do not resuscitate” orders are quietly becoming more extensive so that “DNR” now includes withholding or delaying treatment, hydration, and nutrition. Voluntary euthanasia and assisted suicide is becoming legal in more and more countries and states, while the abuse of the elderly in care homes and assisted living centers is rising at an alarming rate. Is it any wonder that abuse and extermination of the vulnerable elderly follows in a society that willfully exterminates the unwanted unborn?

In a solidly Scriptural reflection, Pope Francis called for a dynamic relationship between older and younger generations. Using the visit of the Blessed Virgin Mary to Elizabeth as a model, he called on Catholics to meditate on the loving interaction of respect and love between the older St. Elizabeth and the adolescent Virgin Mary. “Mary shows us the way,” the pope affirmed, “She set out to visit her elderly kinswoman, to stay with her, to help her, of course, but also and above all to learn from her – an elderly person – a wisdom of life.”

Pope Francis’s best mode of communication is the powerful gesture, the symbolic action, and the memorable image. So the picture of the older woman greeting the young girl as both are pregnant conveys the whole range of the Catholic Church’s joyful affirmation of human life from the womb to the tomb.

The defense of human life is not simply a grim battle to outlaw abortion, euthanasia, and assisted suicide. Catholics insist that their stance is genuinely pro-life. Therefore, in addition to campaigns to outlaw the killing of the vulnerable, we also embrace the fullness of life in loving relationships within the family.

Pope Francis’s message and his reference to the visitation of the Blessed Virgin Mary to Elizabeth reveals the positive pro- life message. As Mary and Elizabeth embraced, we embrace our family members in love, gratitude, and respect. The young embrace the elderly with respect and honor. The elderly embrace the young in tenderness and joy. Both regard the unborn with reverence, wonder, and awe. It is from this heart of joy that the evil of abortion, euthanasia, and murder are defeated.