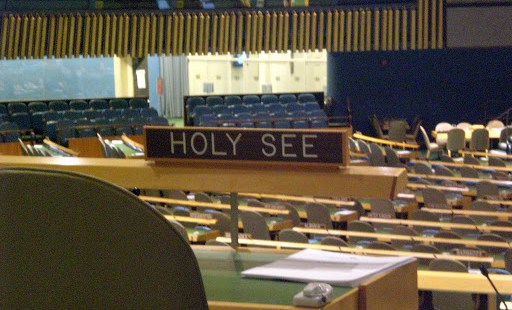 Use of force would be “both licit and urgent”

(Vatican Radio) The conflicts in the Middle East and Ukraine demand a revitalized United Nations where member states put their responsibility to protect persecuted peoples above personal interests and thoroughly apply international law.

This is according to the Vatican Secretary of State, Cardinal Pietro Parolin, who was speaking on Monday at the 69th session of the UN General Assembly.

Cardinal Parolin, said the blood of the many Christians and ethnic minorities in Iraq and Syria, demands the international community assume its responsibility to protect populations under threat.

He said the world is in need of a UN capable of deploying the appropriate action and force.

“It is both licit and urgent to stop aggression through multilateral and a proportionate use of force. The Holy See hopes that the international community will assume a responsibility in considering the best means to stop all aggression and avoid the perpetration of new and even greater injustice.”

The Cardinal added it is disappointing, that up to now, “the international community has been characterized by contradictory voices and even by silence with regard to the  conflicts in Syria, the Middle East and Ukraine.  It is paramount that there be a unity of action for the common good, avoiding the cross-fire of vetoes".

He reminded all those present of the "responsibility to protect" principle adopted almost 10 years ago at a UN World Summit, which calls to protect civilians when a country is unable or unwilling to do so:

“It asserts… the responsibility of the entire international community, in a spirit of solidarity, to confront heinous crimes such as genocide, ethnic cleansing and religiously motivated persecution”.

What is needed, concluded the Cardinal, is “a far-sighted political approach” and “a genuine willingness to apply” the law which if “expressed in new juridical formulations, will certainly bring fresh vitality to the United Nations”.