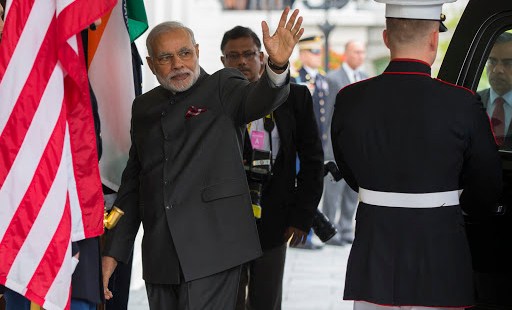 While Indian Prime Minister Narendra Modi scripted a grand show with his five-day visit to the US, at home the growing concern over increasing violence against the Christian and Muslim minorities brought dozens of faith-based and secular groups to protest on September 27.

Speakers who addressed the four-hour long protests, including Archbishop Anil Couto of Delhi, at the Jantar Mantar, a historic monument designated as a protest venue near the national Parliament, were virtually unanimous on one thing.

They were upset over Modi’s “silence” on the “virulent and poisonous hate campaign against Muslim and Christian communities carried out by the cadres of Hindu groups” — that according to a press statement on the meeting.

The protest was mounted by Christian and secular activists after a series of attacks and forced conversions of Christians and Muslims by Hindu fundamentalists in states like Uttar Pradesh, Madhya Pradesh and Chattisgarh in recent weeks.

A report — "100 days under the New Regime — the state of Minorities" — released at the protest by leaders of various Christian denominations, Muslims and social activists pointed out that there have been more than 600 attacks on minorities since the landslide victory of the Hindu nationalist BJP in May.

“The first 100 days of the new regime have, however, seen the rising pitch of a crescendo of hate speech against Muslims and Christians. Their identity derided, their patriotism scoffed at, their citizenship questioned, their faith mocked,” pointed out the statement.

“The environment has degenerated into one of coercion, divisiveness, and suspicion. This has percolated to the small towns and villages of rural India, severing bonds forged in a dialogue of life over the centuries, shattering the harmony built around the messages of peace and brotherhood,” the statement noted.

The Catholic Bishops Conference of India (CBCI) in a press statement on August 12 had expressed concern over “sporadic incidents of violence against Christians in certain parts of India.” In the statement, the Standing Committee of the Indian bishops conference took “strong exception to an unprecedented move in Chhattisgarh (a central Indian state ruled by the BJP) where 50 villages passed a resolution in village councils, denying entry to Christian priests to the villages.”

“India has no place for hate and needs not a ten-year moratorium but an end to the communal and targeted violence against religious minorities,” the 92-page report pointed out.  Modi had called for a 10-year moratorium on religion-based violence in his Independence Day message August 15.

John Dayal, an outspoken Catholic activist who finalized the report, told Aleteia October 1 that “the sad part is that the Prime Minister does not speak either in public nor in (his) party against indulging in hatred.”

Dayal said that the situation reminds him of “what late archbishop Alan de Lastic of Delhi (then CBCI president) told Prime Minister Atal Behari Vajpayee (also of the BJP) in 2009, following a spurt in incidents of anti-Christian violence during BJP rule: “Your silence kills.”

“What Archbishop Alan had told Prime Minister Vajpayee then is true now. The Prime Minister is not speaking out against the hooligans of his party and its affiliate groups,” Dayal lamented.

“Government must take strong measures to end violence, coercion and orchestrated campaigns of hate and violence targeting religious minorities, polarizing communities. Zero Tolerance, not a moratorium, is needed to end communal violence,” pointed out the report.

It was drafted by several committees that emerged from concerned Christians and social activists gathering in New Delhi from late August to counter the increasing assaults on religious minorities.